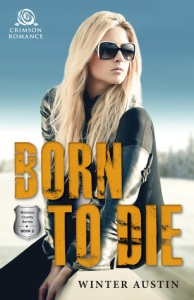 Born to Die by Winter Austin

Trouble’s on the run in rural Eider, Iowa, and Deputy Cassy Rivers’s heart is in the line of fire. Two years ago, she barely escaped a harrowing experience at the hands of a maniac—and not without scars. Now a series of random robberies leads to the brutal death of a fellow officer, and she must put her trust in the one man who broke her heart.

FBI agent Boyce Hunt knows commitment isn’t for men with pasts like his. He left Cassy once to protect her from the blackmail and manipulation he faces from his mother’s criminal enterprise. But when they reluctantly partner up to capture the modern Bonnie and Clyde terrorizing McIntire County, their attraction flames to life once more, pulling Boyce between two loyalties.

Will they risk their hearts again, even if it means losing everything?

Born to die is a story with two police investigations, a principal case with several burglaries and murders and one concerning one of the character.

Cassy is a deputy and she was kidnapped and mentally tortured by a maniac, she almost killed her sister because of The Priest. She’s a very strong woman; she’s working even if sometimes it’s hard for her to see certain crimes scenes. Her relation with her sister is a little complicated but they love each other, she’s on bad term with her father, the General. She has a lot of repartee and I appreciated this character. She very smart and intuitive.

Boyce is an FBI agent; he meanly abandoned Cassie after her kidnapping when she needed him. He has his reason but kept them secret for everyone. He loves his work and when he discovers that during his mission he will have to work with Cassie, he is worried. He likes her a lot, but he wants to protect her from his mother, he’s a little tortured by his past and even if Cassie ask him to stay away from her, he has difficulty to obeying.

These two are the principal characters, they are fun and cute together. The romance is here but in the bottom, behind criminal investigations. In the end Cassie and Boyce are two very strong and independent characters with a full potential in love.

I liked the secondary character, Lisa for example is Boyce’s coworker and she doesn’t hesitate to put him back in place when he needs, to say that he is stupid to have left Cassie the first time and that he has to repair things with Cassie.

I also liked Nic, she’s a badass, she was a Marine Sniper and a good one, she was also a deputy and trying to heal from her PTSD, she’s very protective of her sister even if it’s not evident. I like the name she gives to Boyce, she’s very smart.

The principal investigation is very intense and violent, I appreciated the way the characters led the investigation, I also tried to solve it with them. The moments of violence are so well described by Winter Austin that we have the impression to live them.

The other subject is Boyce’s mother, and in the end I like that Cassie is a Rivers, because she’s a badass. She’s very protective with Boyce and she has more strength than him with his mother.

The book is very well written, I really managed to estimate the characters and the story is very intriguing. I haven’t read the first book but I will because I want to know the story of Nic and Con.

I recommend you Born to die if you like a good thriller with a little of romance.

Winter Austin perpetually answers the question: “were you born in the winter?” with a flat “nope.” Having returned to her hometown, Winter has stepped into the chaotic world of a full-time wife, mom, author, and employee.

A lifelong Mid-West gal, Winter rediscovered her love of her beloved Iowa with its hot summers and snowy winters. She grew up listening to the captivating stories told by relatives around the table or a campfire. Since becoming a published author, she learned a mindset of a glass half-empty personality makes for a perfect suspense/thriller author. Taking her ability to verbally spin a vivid and detailed story, Winter translated that into writing deadly romantic thrillers. Combining her love of all things rural, agricultural, and military, she’s turned her small town life upside down.