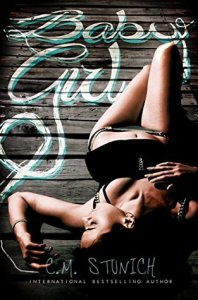 He died that night, alone, in the rain, in the dark, the boy that called me baby girl.
I was only seventeen; we were going to be together forever.

On his way to pick me up for prom, he swerved. I’ll never know what made him do it, what killed the boy I’d loved my whole life. With roses clutched in his hand, he bled out in icy wetness all alone.

His best friend is here though, and I’m pretty sure he loves me.
But after the accident, I left for a year and didn’t look back.

Now I’m back in town and my heart is like shattered glass.
Do I pick up the pieces and risk getting cut? And do I let another boy call me baby girl?

WARNING: Don’t open unless you’re prepared to ugly cry, but also ready to read a story of hope and new love, a love that was there all along but patient enough to wait. This is a book about grief, about loss, but also about fresh starts and new beginnings. The ride is sad, a tumultuous twist of feelings that gets ugly at times … but the ending is a happy one.

BABY GIRL is a full-length 300+ page new adult/contemporary romance novel. It’s a stand-alone meaning this volume contains a complete story; there are no sequels and no cliff-hanger. This novel includes cursing, tears, loss, graphic sex scenes, and new hope.

Something about you de Mily Black

Coral and Bone by Tiffany Daune

Halen knows the sparks igniting under her fingertips are dangerous. She has spent her entire life trying to quell the tingly feelings that make her destroy things, but now that she is back in Rockaway Beach, where she watched her father drown, the flames have become impossible to tame.

Halen is trying to hold on, but when she is thrust into a mysterious new world, the underwater realm of Elosia, she unravels the secrets of her past and can’t help but ignite. As she explores Elosia, she realizes her life has been a lie. And when those who have deceived her come to her for help, Halen must choose—walk away or unleash the magick that could destroy them all.

Curses and Ash by Tiffany Daune

A demented twin sister, a demon hijacking her powers, and a mysterious journal filled with more questions than answers—Halen needs her Guardian Dax more than ever. But if she confides in Dax, she fears he will never forgive her, not after all he sacrificed to help her vanquish Asair. Halen drowned Asair in a tornado of wings—at least, she thought she killed him. Why then does his mocking voice snake through her thoughts, enticing her to surrender her power? Maybe she screwed up—big time—but she will never allow Asair to control her magick. And when Etils’ fires threaten the Earth, suspicions surrounding Asair’s death rise, igniting restlessness within the realms. Her life in balance, Halen must race time, purge the demon’s soul before flames consume the Earth or the Tari strike first.

The Great Pursuit by Wendy Higgins 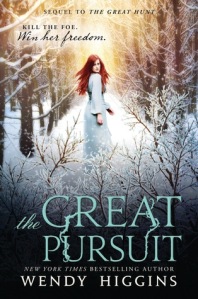 Lochlanach has traded the great beast for something far more terrible, a Lashed enemy veiled in beauty, deception, and a vengeance passed down through generations: Rozaria Rocato. And she’s offering the hunter Paxton Seabolt power and acceptance he could never receive in his homeland. Pax must decide how far he’s willing to go under her tutelage, knowing she is the opponent of Princess Aerity Lochson.

In a land where traditionalists dread change, the Lochlan throne must contend with mysterious foes and traitors, while attempting to keep revolt at bay. As dire circumstances strike the royal family, matters of the castle are left in Aerity’s hands. It’s time to put aside her fears and grasp the reign, taking actions that have the potential to save or destroy her people.

One hunt has ended, but the pursuit for love and justice continue. In this sequel to The Great Hunt from New York Times bestselling author Wendy Higgins, political intrigue and romance intensify in another thrilling fantasy. Princess Aerity embraces a quest for identity and passion before making the ultimate sacrifice for her kingdom.

Blitz and giveaway – The Poison of Woedenwood by K. Ferrin »
« Blitz and Giveaway – Resurrection: Shadows of Omega by Summer Lane