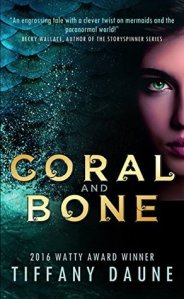 Coral and Bone by Tiffany Daune

Book one in the Siren Chronicles series

Halen knows the sparks igniting under her fingertips are dangerous. She has spent her entire life trying to quell the tingly feelings that make her destroy things, but now that she is back in Rockaway Beach, where she watched her father drown, the flames have become impossible to tame.

Halen is trying to hold on, but when she is thrust into a mysterious new world, the underwater realm of Elosia, she unravels the secrets of her past and can’t help but ignite. As she explores Elosia, she realizes her life has been a lie. And when those who have deceived her come to her for help, Halen must choose—walk away or unleash the magick that could destroy them all.

It had been a long time since I had read a book on mermaids and I’m not disappointed.

Halen doesn’t know she’s not human, she finds out a lot about her and her family that she’s going to have trouble understanding. Halen is naive and above all she isn’t what can be called a brave person at the beginning of the book.

Taje is a friend of the family and even if Halen doesn’t get along with her, they will get to appreciate each other. Unlike Halen, Taje is brave and strong; she knows the issues and doesn’t hesitate to give her opinion when she disagrees.

The mysterious Dax is kind and considerate, although at first he considers Halen a liar, he will eventually get used to her and protect her as much as he can.

Ezra is hilarious, I loved this boy and I’m glad he’s part of the story.

This book is told from two points of view, Halen and Taje and I really liked having these two stories.

The story is simple enough; a girl finds out that she’s a mermaid, which her family has hidden the truth from her and she’s the only one who can save the world. So that’s the basic story but after all is more complex, there are three worlds and Halen will have to save all three and fight a demon that may not be one.

I really liked Taje and Ezra, they are quite complementary and I like to see them interact.

I like the fact that Halen has been reassured over the course of history and I’m glad that Dax is there to support her.

Tiffany Daune writes stories about magick, love and dark creatures lurking in the shadows. She is the author of the Coral and Bone (The Siren Chronicles Book One) for which she also won a Watty Award in the category of Trailblazers. When not lost in Editland, you can find her reading a book from her towering TBR pile or kicking back and watching movies with her family. She lives on an island, in the Pacific Northwest, surrounded by mermaids that are much nicer than the ones found in her books.