Curses and Ash by Tiffany Daune

A demented twin sister, a demon hijacking her powers, and a mysterious journal filled with more questions than answers—Halen needs her Guardian Dax more than ever. But if she confides in Dax, she fears he will never forgive her, not after all he sacrificed to help her vanquish Asair. Halen drowned Asair in a tornado of wings—at least, she thought she killed him. Why then does his mocking voice snake through her thoughts, enticing her to surrender her power? Maybe she screwed up—big time—but she will never allow Asair to control her magick. And when Etils’ fires threaten the Earth, suspicions surrounding Asair’s death rise, igniting restlessness within the realms. Her life in balance, Halen must race time, purge the demon’s soul before flames consume the Earth or the Tari strike first.

Curses and Ash resumes exactly at the end of Coral and Bone, Halen thought to have killed Asair but he finally shares her body. He is determined to forces Halen to give up her powers and her body for him, but it is bad knowing the perseverance of Halen.

At first I was a little annoyed, I’m not used to easily trust people but the fact that Halen doesn’t confide in anyone pissed me off. I didn’t want her to confide in Dax because I don’t have a lot of confidence in him, but at least in Tage.

I found that Halen was still quite immature despite the fact that she’s been maturing since the first book. I appreciated her ways of reacting with Asair, she doesn’t let herself be, but at the same time we feel that she is beginning to appreciate him a little. She will still find out that everyone is lying to her, saying for her sake and she will get to know Natalie.

Dax is quite strange, sometimes he’s kind and caring to Halen and just after he blames her and yells, I really don’t understand this boy and I cannot say I appreciate him.

Tage and Ezra are captured and they will have to fight for their lives and their freedoms. They will all lose a lot and the rest will be hard.

Asair is a strange character, charming and intelligent, he’s the character that I preferred in this book, he knows how to show compassion but he also knows how to do what it takes to get what he wants. It doesn’t matter what he has to do for that.

I really liked Curses and Ash even if at first I wondered where the author wanted to take us but finally everything is fine, I’m not disappointed and I cannot wait to read the last book and see how all the world is doing.

Quick Word: A pleasant suite not to be missed. 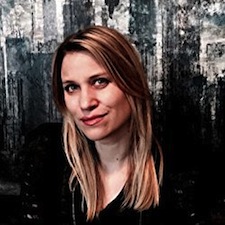 Tiffany Daune writes stories about magic, love and dark creatures lurking in the shadows. She is the author of Coral and Bone (The Siren Chronicles Book One) for which she also recieved a Watty Award in the category of Trailblazers. When not lost in Editland, you can find her reading a book from her towering TBR pile or kicking back and watching movies with her family. She lives on an island, in the Pacific Northwest, surrounded by mermaids that are much nicer than the ones found in her books.