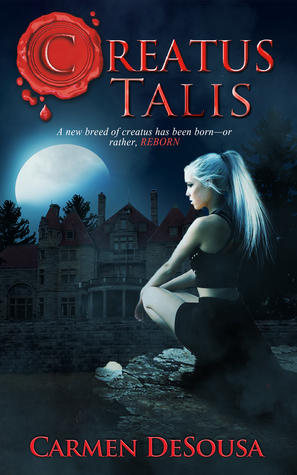 For four thousand years, creatus elders have insisted that the creatus population concealed themselves from human beings because humans had hunted the creatus almost to extinction…

But one woman’s research reveals that when creatus first arrived on this planet, humans didn’t fear the alien beings that looked so much like the human race. That is, until the creatus started to breed with humans, creating a ferocious killer feared by humans and creatus alike. A creature so fierce that its legacy of death and destruction has fed nightmares for millennia. And now, a new breed of creatus has been born — or rather, reborn.

Vev, one of the first generations of creatus talis, finds herself torn between her younger family members and a forbidden love as she fights to save the young talis from being turned into a weapon — or worse, annihilation.

Hesitantly, Vev stepped forward. She’d never kissed a male before. Wasn’t even sure how it worked. She’d read about it, of course. Watched it. But as with everything, her knowledge only took her so far. Life experience, she was learning, was invaluable.

Zach’s heart rate sped up again, and the musky scent she’d noticed intermittently throughout the day escalated. Every beat of his heart fanned the potent scent, filling the room. In response, all of Vev’s senses intensified, as though she were hunting game.

“Vev,” he said, stepping toward her again, “please stay.” His hand stroked her cheek, brushing back a strand of hair. He took another step, this time slipping his arm around her waist.

The pounding in Vev’s heart exploded into such a fast rhythm she could hardly breathe. She gulped, licked her lips. Zach moved just his head toward her this time, pressing his lips to hers. A kiss. Her mouth parted unconsciously as his mouth moved back and forth.

She closed her eyes and inhaled. He smelled so good. So delicious—Vev pulled back so fast that Zach fell forward.

She twisted her body, jerking away. The door. The sun must have set. Regardless, she needed to leave.

“Vev?” His warm hand made contact with her shoulder and she lurched forward, as far away as the room allowed.

She wheeled, facing him. “I’m not human, Zach. Can’t you see that?”

His lips turned up slightly, revealing curved lines that framed his mouth. “You feel plenty human to me.”

“I’m not!” Vev insisted. She reached for the only thing in her vicinity. A broom. She snatched it from the corner and held it up. She didn’t know how much strength humans had. According to Marguerite, not much. “Can you break this?”

“Why would I want to break my broom?”

Vev huffed out a breath. “Can you?”

“I guess. If I leveraged it against something, I could.”

Vev brought the broom down over her knee, splitting it in two, then squeezed her hands around each part, pulverizing the wood until each piece was nearly sawdust. She released the slivers and shards, crumbling the pieces.

Zach’s eyes grew wide. His heart raced disturbingly fast. She hated scaring him, but she had to make him see the danger. Marguerite had said that her research revealed that the earliest humans hadn’t been afraid of creatus, but that they had become jealous of their beauty and strength, and started hunting them. Vev had never understood that. Now she did. Humans hadn’t hunted the original creatus because they were jealous; they’d been frightened. Because humans smelled good. Because even though she liked the feel of Zach’s kiss, a part of her imagined biting his neck and feasting. 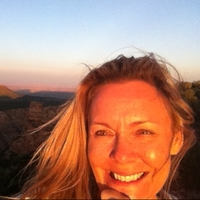 Like most authors, I blame my leap into a full-time career as a professional writer on my love of reading. Reading has always been an escape for me. When life was rough as a child, I could always disappear into a book. But I found something else too… I discovered that writing out my thoughts was healing. Not only could I create hope for my protagonists, but I could do away with the antagonists–legally.

When I penned my first novel, “She Belongs to Me,” I allowed only my cousin and best friend to read it. They are the reason I write. They pushed me to publish, as they felt my stories would give hope to others who’ve experienced tragedies. So now, even though I still write for myself, I also write for my readers who continually tell me that my words touched their soul.

Currently, my husband of twenty-seven years and I live in California with a very spoiled “rescued” calico we lovingly refer to as “Baby Kitty,” even though she’s eleven years old. Hubby and I love to experience different areas, so we move a lot. We’ve lived on both of Florida’s coasts: Cocoa Beach and Tampa Bay; Charlotte, North Carolina; Pittsburgh, Pennsylvania; Chicago, Illinois; Bullhead City, Arizona; and now the Northern Central Valley of California. But we’re always looking for our next adventure, so we travel every chance we get.

Most of my novels share some of our favorite hobbies, mostly, anything to do with the great outdoors. We both love to read on the beach–or in a coffee shop if it’s raining–and if the weather is really nice, we love to go kayaking and hiking. We rarely spend our days off at a movie theater or the mall. In fact, I hate shopping, and my hubby would rather do anything other than take me to a movie when I’ve already read the book. 🙂

Arc review – Stripped Down by Erin McCarthy »
« It’s monday, what are you reading? #211

One thought on “Blitz and giveaway – Creatus Talis by Carmen DeSousa”