Blitz and giveaway – For the blood by Debbie Cassidy 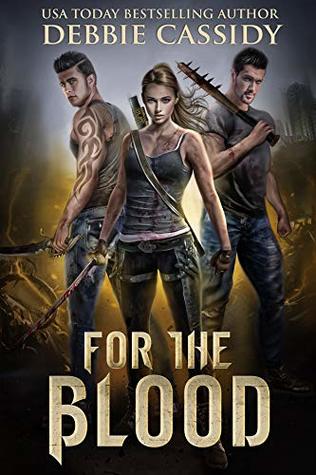 Stay alive at all costs. No attachments, no looking back, no emotion.

The last thing my father gave me was a key. No explanation, no details, just a key. The last thing he asked of me was to take the key to a set of co-ordinates. But survival in a fallen world filled with Feral isn’t easy. The Fangs and the Claws, once upstanding members of society are now slave to the virus, hunting indiscriminately under a perpetually full moon.

They are a new breed of monster—beasts of both fang and fur. Unaffected by the sickness, they crave only one thing, and it runs through my veins. Survive, my father said. Look out for no one except yourself. But sometimes the only way to survive is to make attachments. Sometimes the only way to live is to accept a dance with death. And right now, for me, the path to survival is in the blood.
Here’s to hoping it doesn’t kill me.

Had the stars always been this bright? Or maybe impending death was lifting a veil from my eyes. The steady pump of my blood seeping out of my many wounds and into the dry, cracked earth and my ragged, irregular breath were the only sounds in the cold, still night. The Feral were down, but they’d taken me with them.

Laughter bubbled up my throat, a sound filled with life, if only I could move.

It would be over soon. No more fighting. No more loss. No more pain. The stars called to me, and I watched, counting them as my vision blurred in and out of focus, as my life blood fled my body as if it were a curse. How long before a person bled out?

Sunshine and the scent of freshly cut grass. Kisses, sweet kisses and toffee popcorn, hot cocoa under the stars in the compound garden… Memories of safer times. Happy memories that usually made me feel better, but nope, sorry, still feeling bad.

So sorry, Tobias. So sorry, Dad.

The crunch of boots echoed through the silence, invasive and intrusive. A shadow fell over me. Cold hands touched my face and startling gray eyes blocked out the stars.

The Fang from the storeroom, the one who’d bit me. Uninfected but hungry. Was he going to finish me off? But he was surveying the land around me, his brow creased in a neat frown. He was big, and his rugged, stubbled face hid the perfectly formed lips that had sucked on my neck not long ago.

His attention snapped back to me, and his eyes shone like pennies in the dark. I reached up with a strength I didn’t know I had and touched his chilly jaw. My fingers, deathly pale against his tanned skin, left a bloody trail as they slipped away. My blood had put color back in his cheeks and now that same blood was seeping into the ground, wasted. Was it getting darker?

Arms slipped under me, and my body was torn from the cold, dead earth. Where his hands had been chilled, his body was warm. He cradled me against a wide, muscular chest, and the heat seeped into me, reviving, urging me to live. The scent of cedar competed with the coppery smell of my blood. His nostrils flared, and then he pulled me close, dipped his head, and swept a rough tongue over the wound at my neck. The wound he’d made. Fire shot through me, searing my veins and tearing a hoarse scream from my throat. His mouth latched onto me and horror swelled my heart.

No. Not again. But there was no bite. No draw of blood. This wasn’t the kiss of death, it was life.