Blitz and giveaway – Two witches and a whiskey by Annette Marie 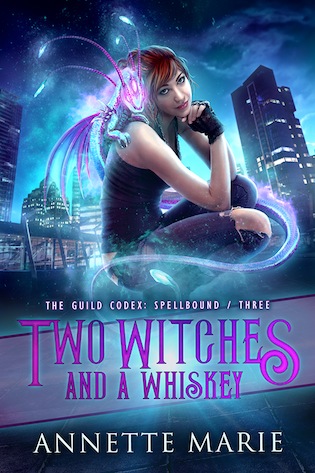 Three months ago, I landed a job as a bartender. But not at a bar—at a guild. Yeah, the magic kind.

I’m not a badass mage like my three smokin’ hot best friends. I’m not a sorcerer or an alchemist, or even a wussy witch. I’m just a human, slinging drinks like a pro and keeping my non-magical nose out of mythic business. Seriously, I know my limits.

So why am I currently standing in a black-magic ritual circle across from a fae lord?

Somewhere behind me, my three mage friends are battling for their lives. Somewhere near my feet is the rogue witch I just knocked out with a stolen spell. And I have about five seconds to convince this very angry sea god not to shmoosh me like a bug.

I’m pretty sure this wasn’t part of the job description.

—
THE GUILD CODEX: SPELLBOUND
Three Mages and a Margarita (#1)
Dark Arts and a Daiquiri (#2)
Two Witches and a Whiskey (#3)

Shouts burst from Aaron’s table in a mix of triumph and dejection. Half the table lifted their shot glasses and tossed them back, Aaron included. He slammed his glass down and growled.

“That one wasn’t fair,” he complained. “Lyndon, your turn.”

Surveying the gathering, I counted most of our top combat mythics—from mages like Aaron, Kai, and Laetitia, to sorcerers like Andrew, Lyndon, Gwen, and Zora. Even Girard, the first officer, had joined in. This was the elite faction of the guild—the ones who claimed the toughest jobs and took on the deadliest opponents.

Ezra was part of the circle too, but he’d slid his chair back and didn’t have a glass. He never drank much, stopping long before he got tipsy.
Whiskey bottle in hand, I leaned against his chair. “What’s going on?”

“Drinking game,” Ezra replied with a grin. “Going around the circle, each person shares something they’ve done or experienced on a job. Anyone who hasn’t had a similar experience has to drink.”

“Since Darius covered it so thoroughly,” Lyndon declared, “I want to know. Who’s been bitten by a vamp? If you haven’t, cheers!”

Groaning, Aaron downed his refilled glass. Wasn’t he happy to be vamp-bite-free? Or maybe he was so many shots in that he’d prefer pointy fangs over more liquor. Laetitia, Gwen, Andrew, and two others drank as well, but Kai didn’t.

Zora pushed her sleeve up and displayed an ugly half-circle scar on her forearm. “The bastard nearly ripped a chunk out of me. It happened back at my old guild and their healer wasn’t top- notch.”

As various mythics whistled appreciatively, Lyndon pulled his shirt collar aside. A similar scar marked the spot where his neck and shoulder joined. “She drained a solid pint before my team caught up. I don’t normally relish a kill, but that one didn’t bother me.”

They passed the whiskey around, refilling their shot glasses.

Andrew, a skilled defensive sorcerer and frequent team leader, leaned back in his chair. “I want to see who hasn’t tripped and fallen on their face in the middle of a fight. And when you drink, we’ll all know you for the liar you are.”

As everyone laughed, Kai alone lifted his shot and downed it. Smacking it on the table, he raised his chin in challenge. “Who’s calling me a liar?”

I snickered when no one said a word. If there was ever a mythic who hadn’t wiped out in a battle, it was super-ninja Kai.

Girard stroked his beard. “My turn, isn’t it?”

Smirking, Ezra half-whispered to me, “Girard will try to make everyone drink.”

The officer shot him a grin, then lifted his glass in a mocking toast. “Not to get too macabre, but Lyndon brought up kills, so. If you haven’t seen at least six bodies in one place, drink.”

“What?” Gwen pointed accusingly. “What kind of horrific shit have you been sticking your greasy beard in, Girard? Who stumbles across six piss-reeking corpses?”

Ah, Gwen. Every time she opened her foul mouth, I had to fight the urge to laugh. With her sleek blond ponytail and penchant for designer business attire, she looked like a high-end executive— an impression she ruined whenever she spoke.

Scowling, she tossed back her shot. Everyone else lifted theirs—except Aaron and Kai. Their smiles had vanished, their expressions grim as they stared at their shots like they wished they could drink too.

An uncomfortable silence settled over the table, then Zora grabbed my arm and pulled me in front of Ezra’s chair. “Tori, you do one!”

His drunken grin back in full force, Aaron took my replacement whiskey bottle and stuffed a full shot into my hand in its place. “Give us a good one, Tori!”

I blinked around the table, packed with the guild’s best warriors. What could little ol’ human me say? What had I done that none of them had? Well, there were a few contenders. Flown with a dragon? Made a darkfae scream like a sissy girl? Punched a rogue druid in the nose? Problem was, I couldn’t talk about any of that.

My gaze dropped to Aaron. “Who here has thrown a drink on three mages at once?”

Laughing groans circled the table. Even Girard had to take a shot.

“Wait!” Laetitia lowered her whiskey. “I spilled a coffee across Darius, Tabitha, and myself once. Does that count?”

The table debated, then decided it counted. Zora gave me a commiserating slap on the hip, making me stumble backward into Ezra, still seated in his chair. He steadied me with a hand on my waist.

“Good try!” Zora exclaimed. “You almost had it, but no one’s managed to make everyone drink yet.”

“Tori could have,” Kai interjected. “All she had to do was say ‘kissed Aaron.’ Then we all would have lost.”

The guys howled with laughter and Aaron snorted.

Zora turned to Alistair, an older man I knew only as the most powerful mage in the guild. He was rarely here, too busy hunting the scariest bad guys both in the city and outside it.

“Last round, Alistair,” she said. “I can’t handle any more whiskey, so this is your final chance to claim ultimate victory. Go big or go home.”

Alistair tugged thoughtfully on his snow-white beard. Deeply tanned and weathered, with full- sleeve tattoos on his sinewy arms, he oozed badass-ness. I leaned forward, eager to hear his challenge.

“Hmm. All right, this is mine: Who among us has fought the ultimate opponent?” His dark stare roved around the table. “Who’s fought a demon mage?”

No one moved. A wordless ripple passed among the mythics as they assessed their comrades’ reactions. Cold, tangible fear crawled through the eerie silence. Then, in near perfect unison, they lifted their shots and drank.

Annette Marie is the author of Amazon best-selling YA urban fantasy series Steel & Stone, its prequel trilogy Spell Weaver, and romantic fantasy trilogy Red Winter. Her first love is fantasy, but fast-paced adventures and tantalizing forbidden romances are her guilty pleasures. She lives in the frozen winter wasteland of Alberta, Canada (okay, it’s not quite that bad) with her husband and their furry minion of darkness—sorry, cat—Caesar. When not writing, she can be found elbow-deep in one art project or another while blissfully ignoring all adult responsibilities.