Blitz and giveaway – Coming for you by Kristi Belcamino 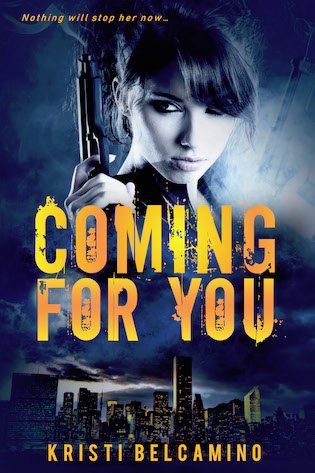 Sofia Kennedy has spent the last twenty-four years keeping her past a dark secret. To the rest of the world, she’s a gifted graphic designer, marvelous cook, and doting Minneapolis mother.

But then her daughter is murdered.

Sofia soon wonders whether her life of lies has caught up with her. The police are asking dangerous questions and going after the wrong man. It’s up to Sofia to hunt down her daughter’s killer before her elaborate deception is exposed and she loses whatever semblance of a life she has left.

I wasn’t really paying attention until the boy was right in front of me.

Instead, I was concentrating on the big stack of books on the counter. I was rearranging them like the bookstore owner wanted—to showcase the week’s bestsellers. It was busy work—I was looking for anything to keep me from thinking about my mom. If I thought about her, I would start screaming or crying or hit something. I hated her so much. Okay. I didn’t really really hate her, but I’d never been so angry at her in my life. I thought she loved me, but really, she’s been lying to me my whole life and keeping me from my family. My grandmother. Who was apparently alive despite my mom saying she was dead.

My entire childhood I was insanely jealous of the other kids who had grandparents. On grandparents’ day at school, my mom didn’t even try to find someone else to go. Sadie’s grandparents were dead, too, but at least Sadie’s mom had arranged for this grandma-like neighbor to go. My mom just shrugged when I complained about it.

When I first saw the message on Facebook, I thought it was probably from some creepy old pervert pretending to be my long-lost grandma. Nobody I know ever gets on Facebook anymore. I don’t even know why I checked it that day. I didn’t want to believe her, but then she told me things about my mom that most people would never know.

Like how the burn scar on my mom’s arm is from when she was trying to cook her own pancakes for breakfast when she was four. Or how she has this one mole on the back of her neck that you can only see when she puts her hair in a bun to take a shower.

What I can’t understand, or forgive, is why my mother lied.

I’m so confused. Nothing seems real. Every day I come home and pretend I have a lot of homework, but instead, I go in my room and get in bed. I worry if I even look at my mom I’m going to scream. Sometimes when she’s not paying attention, I’ve caught myself staring at her, wondering who the hell this lying woman really is and where did my real mom go?

I was so upset about my mom that I barely noticed the boy at the counter in front of me. When I looked up and saw him there, I jumped and he laughed. He stared at me with these black eyes and I couldn’t look away. It was unnerving. For a second I didn’t know what to say. And then when I did talk it was like I was ten again talking snotty to a cute boy.

He laughed again. “Is that how you greet your customers?”

His accent was lilting and sounded sophisticated.

Before he opened his mouth, if you looked at him, with his short spiky dreads and baggy jeans, you’d think he was just some really cute thuggish boy from the north side. But when he spoke, he suddenly seemed like he should be on stage doing Shakespeare. It was unsettling. Who spoke that way?

“Yes.” He crunched an already wrinkled piece of paper he was holding. “I’m looking for ‘The History of Herodotus.’”

“Oh.” There you go, Kate, wow him with your scintillating response. “Actually, I’m not sure we carry that book but I can point you in the right direction, show you where it might be if we have it. It’s nonfiction, right?”

I’d never heard of the book.

“Yes. There are actually a few books by him. They are called ‘The Histories.’ They are about the history, politics, cultures, and traditions of Greece and North Africa and Asia. There are nine books in the series.”

“Oh.” Again, brilliant answer, Kate. “I can see if we carry it.” My tone was officious, businesslike to hide that I felt like an idiot. I started to come out from behind the counter.

“You don’t have it on your computer?” He eyed the laptop on the counter.

I shook my head. It was the bane of my life. “The owner is a little old-fashioned. I’ve been trying to talk him into cataloging online, but it’s a slow process. We order online, but we don’t keep our inventory there yet. Kind of stupid, huh?”

He shrugged. He gave me this smile and I couldn’t help but smile back.

I came out from behind the counter, self-consciously smoothing my skirt down as I stepped in front of him. “Follow me. I’ll show you the nonfiction section and the area where it might be.”

The old bookstore was a maze with one tiny room winding into another. And then there was the basement, which was more open, but still had lots of nooks and crannies. And had two creepy cats. And was haunted. And was where we were heading.

The cats were doing their usual freak show. Caterwauling and running around like banshees, hopping from old sofas to worn-out armchairs scattered around the basement of the store.

I usually tried to avoid the basement. It gave me the creeps. Today, I blamed the haunted part for the hairs on the back of my neck sticking straight up as I made my way down the stairs. It was that—not him being so close behind me.

We wove through the stacks to a back corner where I swung around to face him. “If we have it, it would be somewhere around here.” I gestured to a small bookshelf.

He didn’t say anything just stared at me. I held my breath, staring back. His eyes moved down to my mouth and he swallowed. It seemed impossible, but he was acting like he was nervous.

He cleared his throat. “Okay. Thanks,” he finally said.

I turned to go and he said, “You’re leaving?”

“Yes, I’m the only one here. I have to stay upstairs at the counter.”

“It’s just kind of freaking creepy down here. It’s like cold and shit and those cats are freaking me out.”

His eyes grew wide. “Bloody hell?” His voice was incredulous and he quickly looked around. “Seriously, though.” His voice wavered and a panic flitted across his face. “Can you just wait a second while I look?”

I was taken aback. He was six-feet-tall and looked like he could thump anyone who messed with him and, yet, he was frightened out of his wits.

I shrugged. “Okay. I’ll probably hear the bell if someone comes in.” It was a lie, but I wanted to stay close to this boy. For no good reason.

“I’ll help you look.” Kneeling, I scanned the bottom shelf. He knelt beside me, reading the titles quietly out loud. It took a while, but then I found it on the second shelf from the top. “Voila!”

I plucked it off the shelf and handed it to him, plopping it in his arms. It was heavy. I was rewarded a smile.

“Great. Let’s get the hell out of here,” he said and took off without waiting for me.

I followed him up the stairs this time, trying not to smile, but it was tough.

He was still at the bookstore an hour later, stretched out on one of our old beat-up leather chairs, concentrating on whatever he was reading.

For the rest of my shift, I mostly forgot he was even there as I went about my work. Every once in a while, I’d look over and watch him beneath my eyelashes. Watch how his brow furrowed for a few seconds and then he’d nod as if he just understood something.

When it was a few minutes after closing time, I cleared my throat until he looked up. Behind him through the window, I could see that the world outside was white with snow pummeling down.

He looked up as I reached for my coat.

“Oh.” He sat up straighter. “Oh. What time do you close?” He seemed dazed, his finger holding his place in the book.

He scrambled up. “Oh dear, I’m sorry.” He shrugged on his coat.

I laughed. Who said “oh, dear?” Nobody I knew. At least nobody under seventy.

I waited for him to bring the book up to the counter to buy, but he didn’t, just held it dangling from his arm and then, seemingly reluctantly, set it on the coffee table.

It was a heavy book. And expensive. At least for our used bookstore. It probably cost twenty-five dollars or more. Maybe if he was a college kid, like I suspected, he couldn’t afford it.

He opened the door and paused. A whoosh of cold air and small flakes of snow swooped inside. Then he turned. “See you next time?”

I didn’t know what to say so I just smiled. I’m sure it looked like a grimace. So that wasn’t awkward, was it? Totally. Cringy.

After I was sure he was gone, disappeared into the whiteness of the snowstorm, I picked up the book and put it behind the counter on a shelf where I kept my things.

I hoped the boy would come back for it. And I didn’t know why.

Sure, his smile was nice. And he seemed smart. In addition, his accent proved he wasn’t from around here.

All those things combined made him the most intriguing boy I’d ever met. 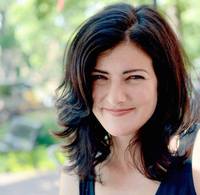 She is a crime fiction writer, cops beat reporter, and Italian mama who also bakes a tasty biscotti. In her former life, as an award-winning crime reporter at newspapers in California, she flew over Big Sur in an FA-18 jet with the Blue Angels, raced a Dodge Viper at Laguna Seca and attended barbecues at the morgue.