Adrienne Morales is a hunted woman.

Stalked by Voids—people immune to magic—and pursued by a deadly past, Adrienne wants nothing more than to avoid spells and sorcery. Her powers as an enchantress make that impossible. Every few days she must release the magic gathering around her, or it’ll steal her sanity. The only way to stay alive is to practice her magic in secret, hiding enchantments in works of art she sells in her craft store.

When a firebreathing psychopath controlled by enchantment tries to burn down her store, Adrienne unleashes her powers to stop him. Unfortunately her battle has a witness—Adrienne’s handsome business partner. Turns out he’s a Void, and sworn to a Union that executes rogue magic users. Worse, the firebreather isn’t the only victim to pop up around San Francisco. Someone is using magic to create monsters and destroy minds, and the Void Union wants them dead.

Now Adrienne must capture the rogue enchanter before they ruin more innocent lives—and before the Voids punish her for the rogue’s crimes. But Voids aren’t the worst thing chasing her. Every enchantment she crafts makes it more likely her past will track her down. And if it does, madness will be the kindest fate awaiting her.

This excerpt is from chapter one, and catches the narrator Adrienne in a tight spot, with magic pressing in on her, demanding release. Here’s a taste of how she usually handles a buildup of her power:

I found Kendall in the knitting section, sorting out balls of yarn that customers had misplaced. “Kendall, I need your wallet,” I said.

My best friend spun toward me, her green eyes alarmed. Her dagger-shaped dangly earrings jingled as she looked me up and down. “You okay?”

“Wallet,” I said, flinching as another wave of magic rolled over me. “Now.”

Wordlessly she drew her duct tape wallet from her back pocket and passed it over. She’d made it herself with black tape and orange trim, and a little beaded zipper pull that read “404 Money Not Found.” I rummaged through the cash pocket until I found a smooth, new twenty. I yanked it out and returned the wallet.

“You gonna give that back?” Kendall called as I rushed away.

At my workspace, I flashed a reassuring smile at Mrs. Jacinta before ducking behind the partition. I slapped the twenty on the metal table beside Mrs. J’s half-finished wind chime, then draped the leather cord across the two objects. I closed my eyes and reached into the fog of magic choking the air.

May riches grace the home where this wind chime rings, I chanted in my mind. May poverty never find shelter there. May this be a talisman of plenty, a harbinger of abundance.

I repeated the words as I felt the magic move, swirling around me, guided by my impromptu enchantment. I sent it into the twenty dollar bill, letting it absorb the money’s nature, the crispness of the paper, the smell of the ink, the financial security it represented. Once the magic had stewed there, I channeled it through the soft leather cord and into the engraved wave on the chime.

When I opened my eyes, the enchantment had taken hold.

Want a free step-by-step crafting guide from the novel’s characters, and a chance to win other awesome swag? Enter the Enchantress Undercover pre-release drawing! All you have to do is pre-order the book for 99 cents, then submit a copy of your e-receipt, plus your name and mailing address to EnchantressSwag@gmail.com. (You need to include an address to be eligible; otherwise you can’t get your prize if you win.) There are three levels of prizes:

To get your crafting guide and your chance to win the other prizes, pre-order Enchantress Undercover on Kindle, and submit a copy of your e-receipt, your name, and the address where you’d like possible prizes shipped to EnchantressSwag@gmail.com. 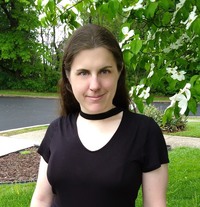 A. C. Spahn is the author of the Endurance series and the Arcane Artisans series. Her shorter works have been published by Daily Science Fiction, Star*Line, Outposts of Beyond, Disturbed Digest, and others.

She wanted to be an interstellar starship captain when she grew up. Since nobody was hiring, she became a writer instead. She enjoys training in martial arts, organizing messy rooms, and cooking, sometimes all at once. When not commanding imaginary starships, she lives in Pennsylvania with her husband, son, and feline overlord.

Arc review – Splintering Reality by Catherine Kopf »
« It’s monday, what are you reading? #228