Blitz and giveaway – Climbing the Walls by Sacha T.Y Fortune 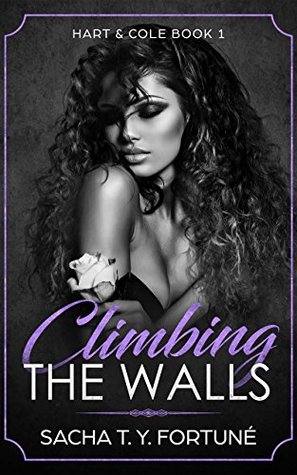 ***Real emotion. Real life. Real love. This is NOT a glossy love story. But if you’re looking for a romance read that will rattle you… characters that will change you… and love that will last in your mind long after you’re finished… THIS IS THE ONE FOR YOU.***

Kris fell, head over heels over hormones, for the damaged b*tch who became his power-woman sex-goddess wife.

All Nicole wants is to be a better mother, and a wife more worthy of the husband she loves with every fibre of her body, but she is constantly yanked away by her job and her overbearing boss Darren Hart.

But Darren has marital problems of his own – and, when he confides in her, Nicole realises just how easily a happy marriage can crumble.

…Can she keep her own from doing the same?

Told from both points of view, “Climbing The Walls” explores the fibres that hold a marriage together – love, trust, forgiveness… and of course, the earth-shattering sex that will not be denied.

More books in the series:

“Whose fault is it that she doesn’t have a husband and kids to go home to?”

“That’s by choice.” I shake my head vigorously, turning on my heel again. My tone drops as I walk into our bedroom. “And to tell you the truth, I’m beginning to see why she made that choice.”

Remembering that the kids are sleeping, I resist from slamming the door. I yank off my tie, almost choking myself in the process. I’m more gentle with my belt, pulling it out and flinging it on the bed with the tie. I throw my shirt into the dirty clothes hamper, sit on the bed and kick off my shoes, pull off my socks, step out of my trousers, pull off my briefs. I hang up the belt and tie on their respective hooks, fling the rest of my dirty clothes into the hamper and head for the adjoining bathroom.

I’m in the shower four minutes later with the steaming hot water coursing over my body when I hear the door creak open. My back is turned in the direction of the door, but I can picture her standing there, the stretched-out neck of my old t-shirt hanging off one of her shoulders, her arms folded across her chest.

“What do you want?” My voice is choked and thick, and the words barely come out. The shower’s doing a magnificent job of sweeping away the tears that would have been gathering at the corner of my eyes. Big boys don’t cry. Men don’t cry. No matter if they feel like shit and want to relive an entire day because they just completely fucked it up and to top it off they just said the stupidest thing they could have possibly ever said in the six long years of marriage.

The shower door slides open, and she steps in. I can feel her magnetic presence there behind me, but it’s not until her arms circle my waist and her breasts press into the centre of my back that I am fully aware that she’s naked, not in my t-shirt like I had previously assumed.

She lays her head there against my back for a moment, and then answers: “You.”

I turn around, lift her up and let her legs wrap around my stomach, her arms around my neck and my hands supporting her weight effortlessly under her ass. She leans her forehead against mine, so that her long wild curls makes a curtain on either side of our faces as we kiss, gently at first and then deeper, with some pressing urgency neither of us can understand.

Her hands clutch at my hair, she’s nibbling my lower lip, I’ve been feeling myself getting hard since her nipples kissed my back but I’m rock hard now and can’t help it, can’t stop it, can’t turn back. She’s always had that effect on me, pushing me to the breaking point before I even realised I stepped into the proverbial door and it slammed shut behind me.

Our relationship has forever been a seesaw of raw emotions, of arguments and bitterness and bitchiness and anger and pain and screams and frustration, fused with the smiles and love and tenderness and sweetness and of course the earth-shattering sex. The more severe the argument, the more powerful the sex. That’s how it always has been.

Not to say that we haven’t had sex when we weren’t spitting mad at each other. No, not at all. Of course not. Christ, no. Just that the post-hatred sex has always been more intense, more passionate. More nerve-wrecking.

The more severe the argument, the more powerful the sex – and we’d just endured two of the most tumultuous weeks of our marriage. So go figure.

And there are no sorrys, no apologies, no retractions of previously yelled insults and jabs, no promises that it won’t happen again because we both know it will. And most likely, pretty soon.

In the midst of it, Kris’ little warning bells shriek, telling him that it’s not healthy to use sex like this, not healthy to quell the argument with sex. It never has been healthy.

And he’s tired of fighting, tired of the stress, tired of the lack of sleep because whether or not he is willing to admit it, Nicole is responsible for his sanity as well as his insanity and his ambition and his drive and every raised pore in his body. He can’t get by in life unless he’s getting along with her because he falls apart and crumbles, crashes and burns out quicker than the shortest fuse. She crawls under his skin, eats away at his insides like acid, and has the power to reconstruct him with the merest hint of a vague smile. She’s always had that effect on him.

And his anger surges and subsides repeatedly as she melts away his rage with her body, as her lips and her tongue and her fingertips work their magic along the hard ridges of his body.

He doesn’t know what to do with her, not sure how the hell he could manage a day without her.

And he’s fully aware that having sex would only be a temporary patch to their relationship, but what the fuck. He hasn’t had sex in three and a half weeks. The Friday night she’d convinced him to let her go to Kiki’s meeting alone, they hadn’t gotten around to the having sex part of the seduction, although Nicole had achieved her goal anyway.

And he’s fully aware that sex is not going to cure everything. It’s basically just a first aid kit. The actual process of curing would take ages upon ages, and time was something the Gellars have never been profusely blessed with. So this is the shortcut.

And he’s fully aware that taking this shortcut is absolutely wrong.

But, of course, it’s always the wrong things that feel so damn good. 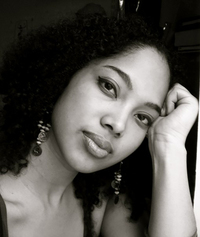 Sacha T. Y. Fortuné hails from the twin islands of Trinidad and Tobago in the Caribbean, and she considers herself a “citizen of the world” [Read her “30 Day Truth Challenge” here – go to Day 16].

Her passion for writing began in her early childhood, when she channeled her active imagination into writing short stories, poems and full-length novels for her friends.

With her BA in Media & Cultural Studies under her belt, she went on to complete her MA in International Journalism at the University of Westminster in London, UK.