The kingdom by Jess Rothenberg 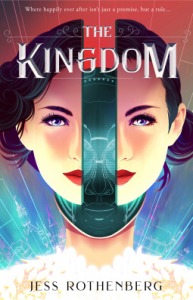 Welcome to the Kingdom… where ‘Happily Ever After’ isn’t just a promise, but a rule.

Glimmering like a jewel behind its gateway, The Kingdom(TM) is an immersive fantasy theme park where guests soar on virtual dragons, castles loom like giants, and bioengineered species–formerly extinct–roam free.

Ana is one of seven Fantasists, beautiful “princesses” engineered to make dreams come true. When she meets park employee Owen, Ana begins to experience emotions beyond her programming including, for the first time… love.

But the fairytale becomes a nightmare when Ana is accused of murdering Owen, igniting the trial of the century. Through courtroom testimony, interviews, and Ana’s memories of Owen, emerges a tale of love, lies, and cruelty–and what it truly means to be human.

The Mantle that separates the kingdoms of Elsira and Lagrimar is about to fall. And life will drastically change for both kingdoms.

Born with a deadly magic she cannot control, Kyara is forced to become an assassin. Known as the Poison Flame in the kingdom of Lagrimar, she is notorious and lethal, but secretly seeks freedom from both her untamed power and the blood spell that commands her. She is tasked with capturing the legendary rebel called the Shadowfox, but everything changes when she learns her target’s true identity.

Darvyn ol-Tahlyro may be the most powerful Earthsinger in generations, but guilt over those he couldn’t save tortures him daily. He isn’t sure he can trust the mysterious young woman who claims to need his help, but when he discovers Kyara can unlock the secrets of his past, he can’t stay away.

Kyara and Darvyn grapple with betrayal, old promises, and older prophecies—all while trying to stop a war. And when a new threat emerges, they must beat the odds to save both kingdoms.

From the internationally bestselling authors of THE ILLUMINAE FILES comes an epic new science fiction adventure.

The year is 2380, and the graduating cadets of Aurora Academy are being assigned their first missions. Star pupil Tyler Jones is ready to recruit the squad of his dreams, but his own boneheaded heroism sees him stuck with the dregs nobody else in the Academy would touch…

A cocky diplomat with a black belt in sarcasm
A sociopath scientist with a fondness for shooting her bunkmates
A smart-ass techwiz with the galaxy’s biggest chip on his shoulder
An alien warrior with anger management issues
A tomboy pilot who’s totally not into him, in case you were wondering

And Ty’s squad isn’t even his biggest problem—that’d be Aurora Jie-Lin O’Malley, the girl he’s just rescued from interdimensional space. Trapped in cryo-sleep for two centuries, Auri is a girl out of time and out of her depth. But she could be the catalyst that starts a war millions of years in the making, and Tyler’s squad of losers, discipline-cases and misfits might just be the last hope for the entire galaxy.

They’re not the heroes we deserve. They’re just the ones we could find. Nobody panic.