Blitz and Giveaway – The Con Artist by Kitty Thomas 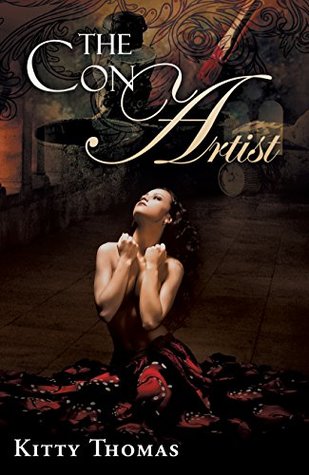 When starving artist Saskia Roth meets Lachlan Niche, a local art collector and tech tycoon, she has no idea how her life is about to change. One act of desperation, one con gone wrong, and she finds herself at the mercy of a powerful man she fears and despises-or so she thinks.

As her desire for him grows, life as his captive becomes something more… something that could both transform her and destroy her.

EXCLUSIVE first teaser scene from the upcoming: THE ESCAPE ARTIST at the back of the book!

Quill set the box next to the cage and walked the few feet to where Saskia sat like a sculpture on the ground. He pulled her up and, without a word, began to undress her. She didn’t dare speak.

He unbuttoned her jeans and slid them off her hips, his hands running carefully over each inch of skin as he exposed it to the cool air. She braced her hands against his shoulders as she stepped out of the jeans, kicking her own shoes off in the process.

She’d worn a thong under the pants—subconsciously seducing him, knowing he’d discover it because of course this was coming. Quill ran an appreciative hand over the bared flesh, then removed the thong as well. She was left in the black cami top and collar. She hadn’t bothered with a bra on the plane. She’d tried not to think too much about that choice.

It took almost nothing, not even the hint of a breeze, for her nipples to stand at attention.

Typically, she wore bras with padding, not to look larger, but to avoid looking sexually excited even when she wasn’t. It attracted the wrong kind of attention. And she couldn’t be bothered to constantly explain to men with a frat-boy mentality that they just did that.

Quill cupped her breasts over the thin fabric and tweaked her nipples into even harder points as he stared into her eyes in the most unnerving way. She tried to look down. Some demure submissive instinct? She wasn’t sure, but when her gaze dropped, he slipped a hand under her chin and forced her gaze back to his.

Minutes passed in this aching silence. It was a challenge. A game. Who would speak first? As in any negotiation, whoever spoke first, lost. She knew that at least. She’d already lost once with this man, and she wasn’t willing to keep doing it.

Finally, he peeled her top off, and she stood on the cold marble floor, the sun from the skylight warming her back… waiting.

She didn’t wait long. He led her quietly to one of the Greek columns on the south end of the gallery and extracted a key from his pocket to unlock the chains. He turned her to face the column and locked each wrist in place so that her arms were stretched high over her head in a V. Then he did the same with her ankles. She felt as if she’d been left for a lion to rip apart in some huge amphitheater while the bored elite looked on.

Quill dragged the mystery box over to the column. She wouldn’t let herself look inside, too afraid if she saw what all he’d brought out here to torture her with, she’d start screaming and begging for mercy. She closed her eyes as large, strong hands skimmed over her back.

Despite her fear, her body arched into his caress. He pressed a soft kiss against her shoulder, then he rooted around in the box until he found what he was looking for.

Saskia wished there was a clock on the wall, something to mark this length of silence. Some tiny clicking tick tick tick so she could feel and know that time was still a thing that moved even as she stood frozen in this space.

She waited for him to say something. Anything. But now that it had begun, he seemed devoted to this eerie peace.

She jumped as something thudded against the skylight. There was a flapping of wings, and she looked up in time to see a disoriented raven fly off. A beat later, the whip came down across her back, and she winced against its bite.

She hadn’t had time to register the sound as it sliced through the air, the noise competing with the bird outside. But she heard it the second time, so sharp and loud it seemed it could rip time and space apart. The leather licked across her flesh like a serpent made of flame, and all she could do in response was tremble in his chains.

Screaming, crying, begging, all of these things would have been appropriate, but Saskia couldn’t do it. She couldn’t break this vow of silence she’d committed to, and it seemed neither could he. Neither of them spoke, too locked into this trance to interrupt its flow now.
The only sounds that spilled forth into the gallery were the snap and crack of the whip and the tiny gasps as it stole her breath. The tears finally came, sliding down her cheeks in that same respectful silence. And she knew, even without words between them, that he was pleased.

She counted each lash in her mind. She felt his strength, not in how hard he waled on her, but in how he restrained himself and held each strike in check.

Finally, he returned the whip to the box. She tensed, waiting for something else—not sure she could take more when no comfort was offered. While he hadn’t put her in physical peril, the lashes were much harder and more intense than the light play she’d experienced at the few kinky parties she’d been to on a lark.

And here there was no magic word she could say to make it all stop. All she could do if it became too much was beg and hope he’d have mercy on her.

Saskia startled when his hand wrapped around her throat, pulling her back, turning her tear-streaked face toward him. He left a long, lingering kiss on her mouth that took her breath away.

When he pulled back, he said, “I’m going to paint you now. Just like this.” 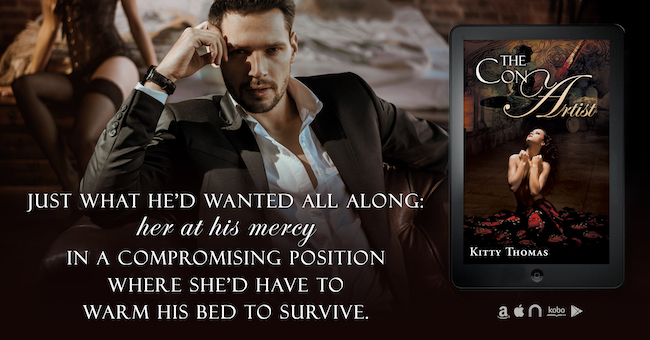 KITTY THOMAS writes dark stories that play with power and have unconventional HEAs. She began publishing in early 2010 with her bestselling COMFORT FOOD and is considered one of the original authors of the dark romance subgenre.

To find out FIRST when a new book comes out, subscribe to Kitty’s New Release List: KITTYTHOMAS.COM

Stacking the Shelves #245 »
« Blitz and giveaway – Mambo by Melanie Munton