An Amazon Best Book of the Month! A captivating and powerful exploration of the opioid crisis—the deadliest drug epidemic in American history—through the eyes of a college-bound softball star. Edgar Award-winning author Mindy McGinnis delivers a visceral and necessary novel about addiction, family, friendship, and hope.

When a car crash sidelines Mickey just before softball season, she has to find a way to hold on to her spot as the catcher for a team expected to make a historic tournament run. Behind the plate is the only place she’s ever felt comfortable, and the painkillers she’s been prescribed can help her get there.

The pills do more than take away pain; they make her feel good.

With a new circle of friends—fellow injured athletes, others with just time to kill—Mickey finds peaceful acceptance, and people with whom words come easily, even if it is just the pills loosening her tongue.

But as the pressure to be Mickey Catalan heightens, her need increases, and it becomes less about pain and more about want, something that could send her spiraling out of control.

Everyone knows what happens in the end. A mermaid, a prince, a true love’s kiss. But before that young siren’s tale, there were three friends. One feared, one royal, and one already dead.

Ever since her best friend, Anna, drowned, Evie has been an outcast in her small fishing town. A freak. A curse. A witch.

A girl with an uncanny resemblance to Anna appears offshore and, though the girl denies it, Evie is convinced that her best friend actually survived. That her own magic wasn’t so powerless after all. And, as the two girls catch the eyes—and hearts—of two charming princes, Evie believes that she might finally have a chance at her own happily ever after.

But her new friend has secrets of her own. She can’t stay in Havnestad, or on two legs, unless Evie finds a way to help her. Now Evie will do anything to save her friend’s humanity, along with her prince’s heart—harnessing the power of her magic, her ocean, and her love until she discovers, too late, the truth of her bargain.

High seas adventure, blackmail, and meddling gods meet in Dark Shores, the first novel in a new YA fantasy series.

In a world divided by meddlesome gods and treacherous oceans, only the Maarin possess the knowledge to cross the Endless Seas. But they have one mandate: East must never meet West.

A SAILOR WITH A WILL OF IRON

Teriana is the second mate of the Quincense and heir to the Maarin Triumvirate. Her people are born of the seas and the keepers of its secrets, but when her closest friend is forced into an unwanted betrothal, Teriana breaks her people’s mandate so her friend might escape—a choice with devastating consequences.

A SOLDIER WITH A SECRET

Marcus is the commander of the Thirty-Seventh, the notorious legion that has led the Celendor Empire to conquer the entire East. The legion is his family, but even they don’t know the truth he’s been hiding since childhood. It’s a secret he’ll do anything to protect, no matter how much it costs him – and the world.

When an Empire senator discovers the existence of the Dark Shores, he captures Teriana’s crew and threatens to reveal Marcus’s secret unless they sail in pursuit of conquest, forcing the two into an unlikely—and unwilling—alliance. They unite for the sake of their families, but both must decide how far they are willing to go, and how much they are willing to sacrifice.

As she ascends by Jodi Meadows 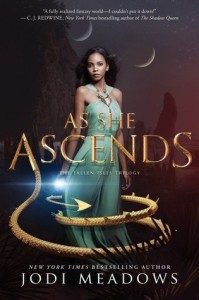 Mira Minkoba is on the run with her friends after a fiery escape from the Pit, where she’d been imprisoned for defending the dragons she loves. And she wants answers. Where have all the dragons been taken? Why are powerful noorestones being shipped to the mainland? And did the treaty she’s been defending her whole life truly sell out the Fallen Isles to their enemies?

As her connection to the dragons—and their power—grows stronger, so does Mira’s fear that she might lose control and hurt someone she loves. But the only way to find the truth is to go home again, to Damina, to face the people who betrayed her and the parents she’s not sure she can trust.

Home, where she must rise above her fears. Or be consumed.

Nothing ever happens in Norway. But at least Ellie knows what to expect when she visits her grandmother: a tranquil fishing village and long, slow summer days. And maybe she’ll finally get out from under the shadow of her way-too-perfect big brother, Graham, while she’s there.

What Ellie doesn’t anticipate is Graham’s infuriating best friend, Tuck, tagging along for the trip. Nor did she imagine boys going missing amid rumors of impossible kidnappings. Least of all does she expect something powerful and ancient to awaken in her and that strange whispers would urge Ellie to claim her place among mythological warriors. Instead of peace and quiet, there’s suddenly a lot for a girl from L.A. to handle on a summer sojourn in Norway! And when Graham vanishes, it’s up to Ellie—and the ever-sarcastic, if undeniably alluring Tuck—to uncover the truth about all the disappearances and thwart the nefarious plan behind them.

Deadly legends, hidden identities, and tentative romance swirl together in one girl’s unexpectedly-epic coming of age.

It’s monday, what are you reading? #253 »
« Blitz and giveaway – Hawk Up by Heidi McLaughlin