Blitz and Giveaway – What lies in Paradise by Leah Cupps 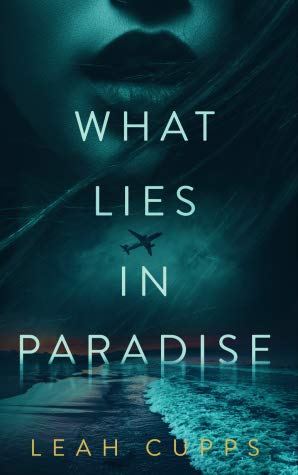 She’s got 400,000 fans. One of them could be the killer.
Instagram Influencer Sydney Evans carefully curates her enviable public persona. Despite being freshly widowed, she’s eager to strike a pose at her best friend’s extravagant destination nuptials. But Sydney’s feed goes dark when she blacks out on the plane, awakening to discover another guest poisoned to death.
With the FBI keen to use Sydney as an insider, she takes the arm of a rookie undercover agent hoping to capture something incriminating. But a deadly run-in exposes a shocking criminal underbelly lurking beneath her own picture-perfect marriage. And if she doesn’t solve the case before her friends tie the knot, the culprit will make sure her next selfie is her last.
Can Sydney catch a murderer or will the wedding become a funeral?
What Lies In Paradise is a fast-paced standalone thriller. If you like real-world issues, lavish socialite parties, and electrifying twists and turns, then you’ll love Leah Cupps’ provocative mystery.
Buy What Lies In Paradise to join a deadly digital whodunit today!

The circular steel barrel of a Glock nine-millimeter pushed roughly against Sydney’s left temple. The gun was searing her skin, still warm from the last bullet fired. One large, tan, muscular arm wrapped around her neck, threatening to snuff out her last few breaths.

I should have seen this coming, she thought. I should have known that if I agreed to go along with this ridiculous plan, something terrible would happen and I’d end up dead.

A series of images from her life began to scroll across her brain, like the snapshots from her Instagram feed. She in pigtails blowing out the candles for her sixth birthday. The fabulous pink satin dress that peeked out from her graduation gown, bright enough to match to her beaming smile. A picture of her at a café in Paris posing with a freshly baked chocolate croissant and a steaming cappuccino. She could see the images, but all she could think about were the choices she didn’t make and the people she neglected.

If she survived this moment, gun pressed against her temple, maybe she would start spending more time with her head in the real world, where life was messy and not one picture-perfect square after another. That was her mistake: projecting the perfect life made her believe she had the perfect life, but she didn’t. Had she tapped the Do Not Disturb button every once in a while, maybe she would have sensed the lies that had begun to weave their way into the real world around her. She could have fallen in love with someone different, someone who led a simple, boring life, like an accountant or a mechanic. But who was she kidding? Love doesn’t work that way.

Although there was shouting next to her ear, the voices sounded far away. All Sydney could hear was the blood thumping through her head and the whoosh-whoosh of her heart beating. The large tropical bushes that lined the walkway reached up toward the sky and bent down to form a canopy over the four of them, giving them respite from the burning Jamaican sun. She was not alone, but that didn’t make the situation any better.

She could still hear the soft call of the ocean behind her but all she could see were palm leaves and the crushed gravel pathway beneath her. Sweat was pouring down her face, neck, and back, soaking the pale blue chiffon dress she had just posted herself wearing on social media a few hours ago.

If only my followers could see me now, Sydney thought.

She heard the click of the pistol’s slide, chambering a round. Sydney didn’t believe in bad luck, but this situation might surely change her mind. Why me? she thought as the world started to blur around her like a watercolor painting. She began to taste the tangy bit of blood forming at the back of her mouth. He was holding on too tightly. If only she could wake up from this nightmare and be somewhere else. Like when she woke up at the airport.

That was the beginning.

Leah Cupps is an entrepreneur and author. She has built and sold several businesses, and documented the process in her first book #MomLifeInc.

She always has a passion for stories and spends her evenings writing novels. Her debut novel is, What Lies in Paradise, will debut in January, 2020.

Leah’s novels are fast-paced, thrillers that will keep you up at night as you can’t wait to see what happens in the next chapter.

Leah lives in Indiana with her husband, three young children and two small dogs. When she isn’t losing sleep writing her next novel or scaling her next business, she enjoys running and spending time with her family.