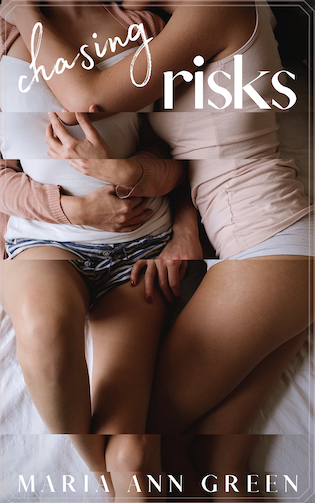 Eleonora – Ellie or Nora or Leo, depending on who’s calling her name at the moment – has the exact life she wants. No really, she does. She couldn’t be happier with her job at the bar she owns with her best friend or her fantastic sex life with her boyfriend, Lucas. Or…with her girlfriend Theo. Hey, she never said it wasn’t complicated, just that she couldn’t picture it any other way.

And, that’s not to say that Ellie doesn’t have struggles. Being proudly bisexual and openly polyamarouns, she knows what it’s like to be judged, to be written off immediately by a lot of people. She’s used to it, though. So when Quincy walks into her bar – and then into her bed – she expects just that, a judgment and a fast goodbye. But somehow this gorgeous woman takes Ellie as she is, with all the baggage. And Quincy even wants more.

But Ellie isn’t sure she has the time for more, for another set of feelings to consider. There are only so many hours in a day. Plus, she’s not the only one who has opinions about Quincy. Lucas understands, he’s always been the easygoing one. But Theo is pissed, and her jealousy flames higher and higher, threatening to burn Ellie’s whole life down with it. And she does have a point, she’s known Ellie a hell of a lot longer. So who is Quincy to walk in and take away more time from Theo and Lucas when their schedule had been working so well?

Who is Quincy to Ellie, and is she worth risking everything for? Because that’s just it. If Ellie can’t find a balance, find a way to juggle it all and keep everyone happy, then taking the risk could cost her the loves of her life.

*Content Warning: sex and lots of it – of both the hetero and queer variety, and language*

The air tingles in my chest, crisp and energizing, as I hold in a breath on my front porch. When I let it out, accompanied by a woosh, I can’t see it in the air, despite my expectation since we’re getting far into autumn. But even without the visual, it’s still cold as balls. And I wrap my vegan leather jacket (aka fake as shit, but with a great enough spin on the wording to get me to spend more that I should have) tighter around my chest.

“I miss the stars,” Lucas says as he shivers in the open doorway, only leaning out to look up at the night’s sky outside with me.

“It’s just cloudy,” I say. But he shakes his head, always up for a debate—no matter the time of day or level of clothing.

“You’re crazy if you think Minneapolis doesn’t have light pollution,” he counters. “I mean, just look down your street.” He points to street lamps and fairy lights all over porches and decks.

“Fine, fine. Whatever,” I admit. Then, thinking better of it I add, “Come here.”

Lucas takes a tentative step out onto the chilly wood planks, tugging his arms even tighter around his bare chest. But before he can get the heel of his first foot outside, I yank him by the broad shoulders and pull him to me.

It sounds more forceful than it looks—because his being almost a full foot taller than me pretty much negates any strength I’d like to convince myself that can subject him to. I mean I don’t have a Masters in Physics, but I don’t think all my energy could get his into motion if he didn’t want it to.

His eyes widen and his lips make the cutest little ‘Oh’ as he shuffles in my direction. And then those puckered lips are on mine, and I’m rewarded with what I’d been aiming for.

Maria lives in Minnesota despite the frozen winters. Actually, she prefers snow drifts and icicles over summer and all that sweat running everywhere. She lives with her husband and little family, which includes a couple lazy cats who make great lap warmers. You can usually find her whishing that she lived in a secret cabin in the woods where she could be a hermit reading and writing all of the time. Instead she lives the suburban life where she pretends to her neighbors and the other moms around that she doesn’t swear like a sailor, have hidden tattoos, and love a good glass bottle of wine. She absolutely believes in unicorns and ghosts and hopes vampires and monsters are real too. She’s a coffee-in-the-morning and wine-in-the-evening kind of person, preferably with a nap in between. Maria prefers cats over dogs, books over people, and late nights over early mornings. She probably shouldn’t talk to anyone until she’s had her first cup of coffee. And if you ever want to hang out with her, you’ll have to be game for a horror movie or just a quick run to target for two (hundred) little things. Also, you couldn’t pay her to be in her twenties again; Thirties is where it’s at. She’s a creative, mouthy, introverted, proud bisexual, highly-sensitive INFJ, Slytherpuff, dork with a sweet-tooth.

Maria devours books, reading mostly in bed or listening to audio books in the car. Writing has been one of her passions for pretty much her whole life. So creativity is a necessity for her, always. After working in the mental health field for almost a decade, she’s now living her dream as a stay-at-home writer, kiddo wrangler, professional snuggler, and constantly-tired-person. When it comes to her writing, she specializes in dark and twisted thrillers or gritty, angsty contemporary romances. But no matter the genre, she always prefers writing deeply flawed characters with dysfunctional relationships. She’s pretty sure the whole “unlikable character” thing is a conspiracy because every character she loves have been labeled this way. Ridiculous. And because of this, she’s pretty much found it impossible to write anything without at least a little mayhem.

Maria was once told she painted with her words, and that phrase stuck with her – because writing really is an art, and good stories are true masterpieces. She’s always trying to grow and improve in her craft, shooting for a masterpiece of her own someday. And she plans to write forever because writing gives Maria the ability to disappear into new worlds and create people within twisting plots, all from the comfort of her couch. She will always believe that though not every story is for her, and her stories aren’t for everyone, every story has a reader.