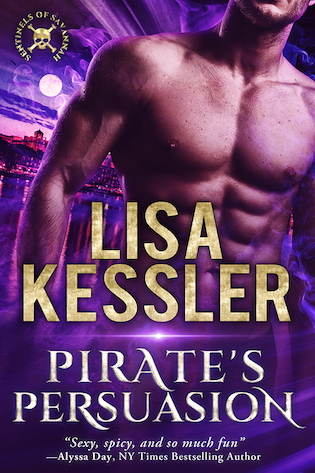 Immortal pirate Drake Cole has a reputation in Savannah for his custom woodworking and historical restorations, but his work has grown into an obsession. He’s become a stranger to his crew since the Sea Dog sank in 1795. None of them know his painful secret. A young stowaway went down with the ship, one that Drake swore a blood oath to protect.

The ghost of a young boy, lost at sea over two hundred years ago, leads local medium, Heather Storrey right to Drake’s door. He saved her life before, and now she has a chance to return the favor, but how can she protect him from a curse that no one can see?

A dark coven possesses the figurehead from the Flying Dutchman, and if Heather and the immortal Sea Dog crew don’t locate the relic soon, Drake may be lost to them forever. Heather has seen the passionate man behind the veil of guilt, and she’s determined to free him from his self-imposed prison, and persuade this pirate to love again.

No trace of judgment lingered in her gaze. He lifted his free hand, aching for reassurance that this wasn’t a dream. His fingers slid through her silky hair as he tucked it behind her ear. Words were too insignificant for this moment, or this woman. He met her eyes and whispered, “I should go.”

She tilted her head slightly, her gaze steady. “Why?”

He swallowed the lump in his throat. “Because…if I stay…I may kiss you.”

She didn’t recoil at his confession. Instead, color flushed her pale skin, enticing him closer as he searched her face.

He lost his tenuous grip on self-control and leaned in closer, kissing her with an unfamiliar tenderness. His battered heart had been on display for her, his secrets exposed, and instead of rejecting him, she offered acceptance, a safe harbor in the storm of painful memories he’d shouldered alone for centuries.

Her hand moved up his chest and around his neck. He tilted his head as her lips parted, opening and welcoming his exploration. She tasted like raindrops and moonlight, delicious and refreshing. He might never get enough. Her fingers tangled in the back of his hair, the pull drawing a long-dormant passion from his soul. He wrapped her in his arms, their tongues tangling in a hungry desperation for closeness.

He yearned for her, to claim her, to know every inch of her. 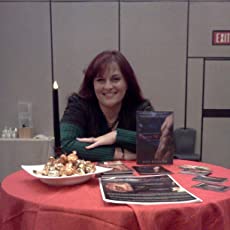 Lisa Kessler is a Best Selling author of dark paranormal fiction. She’s a two-time San Diego Book Award winner for Best Published Fantasy-Sci-fi-Horror and Best Published Romance. Her books have also won the PRISM award, the Award of Excellence, the National Excellence in Romantic Fiction Award, the Award of Merit from the Holt Medallion, and an International Digital Award for Best Paranormal.

Her short stories have been published in print anthologies and magazines, and her vampire story, Immortal Beloved, was a finalist for a Bram Stoker award.

When she’s not writing, Lisa is a professional vocalist, and has performed with San Diego Opera as well as other musical theater companies in San Diego.

You can learn more at http://Lisa-Kessler.com