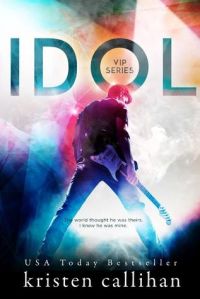 Book one in VIP Series

I found Killian drunk and sprawled out on my lawn like some lost prince. With the face of a god and the arrogance to match, the pest won’t leave. Sexy, charming, and just a little bit dirty, he’s slowly wearing me down, making me crave more.

He could be mine if I dare to claim him. Problem is, the world thinks he’s theirs. How do you keep an idol when everyone is intent on taking him away?

As lead singer for the biggest rock band in the world, I lived a life of dreams. It all fell apart with one fateful decision. Now everything is in shambles.

Until Liberty. She’s grouchy, a recluse—and kind of cute. Scratch that. When I get my hands on her, she is scorching hot and more addictive than all the fans who’ve screamed my name.

The world is clamoring for me to get back on stage, but I’m not willing to leave her. I’ve got to find away to coax the hermit from her shell and keep her with me. Because, with Libby, everything has changed. Everything.

Idol begins very well with a comic situation between Liberty and Killian; I had so much fun with it. I appreciate Liberty, she said what she thinks when she wants, she lives in a house and have no friends. She’s not a strong girl who knows what she wants, she’s afraid of people but with Killian it’s different.

I love Killian, he’s hot, musician, kind and his group is his family. I love the way Liberty and Kilian met, I love how their relation grows up slowly, it gives more deepness to their feelings. Their relation seems so real and magical; Killian is here for Liberty at any moment. There was some moment when I was mad at Liberty because she made Killian suffers and that was selfish. But Killian is just perfect; he knows what to tell Liberty when she needs it.

I love Scottie, not only because he’s the doppelganger of David Gandy but also because he’s arrogant and I like how Liberty talks to him. I’m very impatient to read the next book about him.

I also like Brenna, Rye and Whip, they are Killian’s friends and they know him very well. For Jax it’s another story but I find that character very interesting, he’s not all nice and happy with Liberty.

I really like this story, not only because it’s about a rocker, the relation between all the characters is interesting and it’s good to see people who are helping each other’s. There isn’t surprise in the story but it’s also good to see what happens on stage and not on stage.

Quick word: A very good romance on the background of rock n roll.

Kristen Callihan is an author because there is nothing else she’d rather be. She is a RITA winner and three-time nominee and winner of two RT Reviewer’s Choice awards. Her novels have garnered starred reviews from Publisher’s Weekly and the Library Journal, as well as being awarded top picks by many reviewers. Her debut book FIRELIGHT received RT Magazine’s Seal of Excellence, was named a best book of the year by Library Journal, best book of Spring 2012 by Publisher’s Weekly, and was named the best romance book of 2012 by ALA RUSA. When she is not writing, she is reading.