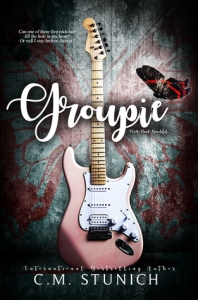 Book one in Rock-Hard beautiful Trilogy

WARNING: This book has one girl and five bad boy rockstars. She owns them all–heart, body and soul.
Don’t read it unless you like to ugly cry…and also unless you like threesomes, foursomes…and moresomes.

“Can one of these five rockstars fill the hole in my heart? Or will I stay broken forever?”

That’s what started everything. With five dollars in her pocket, and everything she owns stuffed in the back of her car, Lilith Goode’s life is over. Done. Destroyed.

Ten words. One text. That’s what it took to change the whole world.

A crumpled concert ticket. A chance encounter. That’s what it takes to start all over again.

Five rockstars. One girl. Six dark hearts, six withered souls.
But can one broken person really put another back together again?
And is a cross-country tour the place to do it?

***GROUPIE is a 130,000 word novel about heartache, love, grief, and the beauty of sex. It contains rockstars, concerts, young love, deep hurt, broken pasts, group sex, one beautiful girl who falls in love with five guys and five guys who fall in love with one beautiful girl. This is a MMMFMM book with a STRONG focus on the woman (although the men aren’t scared of each other’s bodies) aka a reverse harem novel (one woman, five guys). It has a happy ending, NO cliff-hanger, and is the first book in a trilogy.

Lilith just lost her father as she was about to go live with him to help him overcome his cancer. No one had told her that her father was in a critical condition, her stepmother didn’t want her to join her and see her father one last time. Lilith’s past is quite dark, she has no one left and her ex-boyfriend is an idiot who deceived her and gave her a STD. Luck turns and she finds tickets for the Beauty in Lies concert that she will try to resell, but she wins a contest to be VIP at the concert and will meet these rockstars.

Lilith is a girl who has lived many things in her short life, she lost her mother, sister and father, this last loss is that too much and I can understand it. Her way of dealing with the situation is quite special but why not. I don’t know if I appreciate Lilith or not, at times I like her but sometimes she exasperates me. She keeps saying that her father died, at all times, even when she makes love to all these men, it is rather irritating. But I like her to want to help them, heal them and move them forward in their lives. She’s naive, shouldn’t trust everyone as she does but that is what makes the boys appreciate her.

As for the group, let’s start with Paxton, he’s the very definition of the bad boy, he loves girls and treats them badly. He hasn’t had an easy life, like all the others, and as far as he’s concerned, we know a part of it. I like Paxton even if it’s not my favorite, I find that his little broken side and brawler is sexy.

Then there is Muse, this boy is adorable, I wouldn’t say that he’s the nicest of the group but in any case it is the most attentive, the one who takes care of Lilith. We aren’t told much about his past but it made me want to know more.

Let’s talk about Ransom now, he’s broken, physically and morally, his past is for the moment the one that in my opinion is the saddest. It was the group that helped him and even though there may be trouble within the group, Lilith will help overcome them. I really like Ransom, probably because it’s the one who has suffered the most and you know that I love the personalities who have problems.

Copeland is a fan of romance, he always reads and suddenly it gives him a lot of inspirations. I like this side of him, there is something that bothers me and I cannot put my finger on this thing. The past of Cope wasn’t reveal too much to us but it doesn’t look nice at all.

I keep my darling for the end, Michael, I adore him, he doesn’t succumb to the charm of Lilith from the beginning even if he’s more than tempted, I like he retains himself. Why? don’t you tell me, because he has a girlfriend, and I will not tell you more.

As for history, it’s not exceptional, a girl who has just lost her father and fucks the whole group, one by one or all together. She turned into a crazy sex lady when she had only 2 boyfriends in the past. She tries to get out and get the group out of the pangs of the past and that’s one thing I appreciate. If you want a love story, you’ll get one but not conventional, a girl in love with five men for different reasons because these men are all different. They all love it in return, I’m not sure where the author will take us to the other two volumes and if Lilith will end up with one or five men. Even if this book has flaws, it is very addictive, I want to know the continuation and discover the history of Muse and Cope.

I loved this book and would read others with pleasure. C.M Stunich was able to create a different story and even though some things might disturb people, that weren’t my case.

C.M. Stunich is a self-admitted bibliophile with a love for exotic teas and a whole host of characters who live full time inside the strange, swirling vortex of her thoughts. Some folks might call this crazy, but Caitlin Morgan doesn’t mind – especially considering she has to write biographies in the third person. Oh, and half the host of characters in her head are searing hot bad boys with dirty mouths and skillful hands (among other things). If being crazy means hanging out with them everyday, C.M. has decided to have herself committed.

She hates tapioca pudding, loves to binge on cheesy horror movies, and is a slave to many cats. When she’s not vacuuming fur off of her couch, C.M. can be found with her nose buried in a book or her eyes glued to a computer screen. She’s the author of over thirty novels – romance, new adult, fantasy, and young adult included. Please, come and join her inside her crazy. There’s a heck of a lot to do there.

Oh, and Caitlin loves to chat (incessantly), so feel free to e-mail her, send her a Facebook message, or put up smoke signals. She’s already looking forward to it.