Since witnessing her parents’ murders at the age of eleven, Phoenix’s only purpose in life has been to uphold her mother’s dying words – to be strong and survive. But surviving outside of The Walls – outside of The Sanctuary – is more like a drawn-out death sentence. A cruel and ruthless city, Tartarus is run by the Tribes whose motto is simple, “Join or die.”

Refusing to join and determined to live, Phoenix fights to survive in this savage world. But who can she trust, when no one can be trusted? Not even herself…

The first of a trilogy, New World Rising is an epic tale of survival, instinct, trauma, and the extraordinary power of human connection.

A different kind of lovely by Petra March

“A man with a damaged soul fell in love with a ballerina with a broken body.”

When Neal Medwin glimpses Mina Automne for the first time, he’s a man whose soul is darkened with memories of a painful past, whereas Mina is a vibrant, strong, young woman. She’s a determined ballerina who’s carefully planning and painting her life.
Neal steps into her existence and threatens to shatter Mina’s plans with an impossible request.
Mina can’t help the fragile man who’s invading her home, even though their parents used to be close friends and she knows of Neal’s hurtful background. She allows him to linger within her lovely and artistic world, however, hoping he might find some peace and solace.
Slowly, their conflict turns into friendship, and eventually into love, until a terrible discovery ruins Mina’s projects and forces her to let go of all her dreams, and of her sweet, damaged man.
Neal is unable to fight for Mina and for the unripe love they share, because he’s not ready to leave his past behind. He’s not strong enough – not yet. 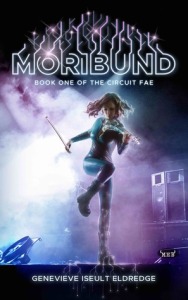 High school sophomore Syl Skye is an ordinary girl. At least, she’s trying to be. School photographer and all-around geek, she introverts hard and keeps her crush on sexy-hot glam-Goth star Euphoria on the down-low. But when a freak accident Awakens her slumbering power, Syl is forced to accept a destiny she never wanted—as the last sleeper-princess of the fair Fae.

Suddenly hunted by the dark Fae, Syl’s pretty sure things can’t get any worse. Until she discovers her secret crush, Euphoria, is really a dark Circuit Fae able to harness the killing magic in technology. Even worse, she’s been sent to destroy Syl. With mean girls and magic and dark Fae trying to kill her, it’ll take more than just “clap if you believe in fairies” to save Syl’s bacon—not to mention, her heart.

The Hunt by Chloe Neill

From the New York Times bestselling author of the Chicagoland Vampires Novels–the hunter becomes the hunted in a New Orleans devastated by a Paranormal war….

When bounty hunter Liam Quinn discovered that Claire Connolly was a Sensitive and infected with magic, he should have turned her in to be locked up in the prison district known as Devil’s Isle. Instead, he helped her learn to control her power and introduced her to an underground group of Paranormals and humans who know the truth about the war and those who fought it.
Now the weight of Liam’s own secrets has forced him into hiding. When a government agent is killed and Claire discovers that Liam is the prime suspect, she races to find him before the government can. But she’ll discover proving his innocence is no simple matter. Their enemies are drawing closer, and time is running out….