Blitz and giveaway – The God Queen by M.L Tishner 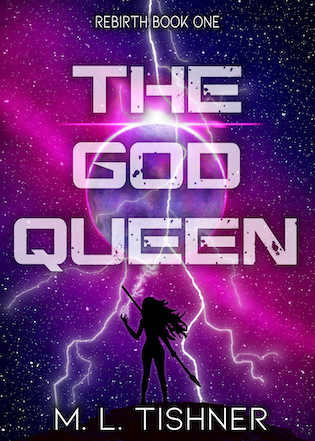 The return of the God Queen is not what everyone hoped…

Humans have long since spread their numbers among the stars. Now far, far into the future, war has torn the Tyre Star Cluster into two major political factions. The militant Dominion have gained the upper hand in the last decade with the murder of Niklaryn Ettowa, the progressive Federation’s champion. Some considered the war to be almost won.

Yet there are those who claim the war will not be ended by mortals…but by the rebirth of the gods.

Rei lived most of her life bartending on one Earth’s backwater towns. She daydreams of something more, traveling the stars, and destroying the man who murdered her brother Niklaryn. Her dream is within her grasp only if she accepts her fate as the God Queen.

Bronx is disillusioned with being a reincarnated god, let alone a reaper. He pays his penance by isolating himself and taking up the mantle of a combat medic. When the sister of his old mentor Niklaryn storms in to join the cause will he find something worth fighting for?

Together with others, they must help the Federation tip the scales in their favor, but clashing plans for the gods threatens to tear it all apart.

Jupiter Ascending meets X-Men in this epic New Adult space opera bursting with star-crossed romance, elemental magic, and an adventure across the star cluster, perfect for fans of A Spark of White Fire.

The screams drew Rei’s attention. She stood at the steps of the boarded-up temple when the first one pierced the quiet of their small town. It came from the restaurant on the other side of the square.

She dashed down the stairs and onto the street, jumping inadvertently in front of a hover car whose driver honked and yelled. She didn’t listen as she rushed past the long-dead fountain, now filled with sand and earth. Gravel crunched beneath her feet as she approached the ever-growing crowd. Not a cloud dotted the clear blue sky, the sun beat down on them mercilessly, and the smell of sweat and dirt filled Rei’s nose. She pushed her small frame to the front to get a clear view, heart hammering in her chest. He had been threatening this for months, yet Rei prayed he wouldn’t actually go through with it, but disappointment pooled in her belly as her fear was confirmed.

“Drops of Jupiter,” someone muttered. “Why couldn’t the cleric give him a quick death? That poison takes too long.”

The boy lay writhing on the ground, blood running from his nose and ears, sand caking his dark hair. Rei turned to leave, blood pounding in her ears, but the crowd was now too thick around her and she couldn’t move.

“He prayed to false gods,” her neighbor, an elderly woman, said under her breath. “The cleric said this would be the fate of those who won’t worship the One True God.”

Ever since Earth voted to remain a part of the Dominion, the other gods were outlawed, despite the fact the holy city lay only a few hundred kilometers away from where Rei stood.

She fought to breathe as her heart raced. She never intended to convert, and the threat of not doing so had become too real.

The victim’s scream brought Rei’s eyes back to him. Folks said the poison fried the nerves, giving the victim the sensation of being electrocuted as the poison opened all the blood vessels in the head and caused blood to leak out of the nose and ears.

The cleric overseeing the execution sat in one of the outdoor tables of the restaurant, his dark eyes hard. His full lips turned down in a sneer at the poor soul in agony before him. It was a contrast to the cheerful, blue- and white-checkered umbrellas and table covers.

Rei’s stomach turned in knots. “Drops of Jupiter is a horrible way to die,” she whispered.

Eventually his writhing stopped, and the boy’s eyes stared at the heavens while his mouth opened in a silent scream.

“Let this be a lesson for those who still follow that blasphemous religion,” the cleric said. “The rest of you have until the end of the week to join the correct religion, or else.” He combed his fingers through sleek blonde hair before leaving. The crowd parted as he walked past, until he caught Rei watching him. She averted her gaze, kicking herself for attracting his attention.

She peered at her watch, trying to appear bored as the cleric approached her. The holographic hands reminded her she was running late, but she never ran from a fight. She pulled her dark hair up in a knot as she began to perspire. Her lips pressed together until there was nothing more than a line after the crowd dispersed and left the boy’s body on the ground.

“I hope you’re satisfied,” the cleric said. “His death is on your hands.”

Rei’s nails bit into her palm at the accusation. She wasn’t the one who decided which religion was the correct one and who should die for it. “Mine?” she growled.

“Yes, you and the others who so heinously turn your backs on the One True God.”

“Why are you so threatened by a boy who believes in many gods instead of one?” she asked, finally meeting his gaze.

“I am not threatened. The One True God wills it. The Dominion wills it.”

Rei’s legs grew weak, but she refused to back down as they locked eyes.

“And what of the will of the god queen?” she asked, standing a little straighter.

The cleric cackled. “She doesn’t exist and neither do those other false idols.”

“I believe she does.”

She rolled her eyes. They had been going back and forth like this for months. At first, Rei wanted to leave him be. She may not have agreed with his religion, but she respected his right to worship as he saw fit. But once he started trying to force his religion by boarding up the temple, bringing in Dominion soldiers to rough up locals who were caught worshiping during holy days, smashing the ceramic statues of the gods around town—including the one her brother bought for her—it became personal.

“I know you’re one of the reasons why many won’t follow the One True God.” His voice was dangerously low. “The people see you not converting, and they think they don’t have to either.”

“They shouldn’t have to.”

He crept closer to her, the smell of his cologne choking Rei. “You will convert. Even if I have to tie you down and perform the rite myself.”

Rei chuckled. “Tie me down? Kinky. Your threats don’t scare me. Try harder.” She spun on her heels and walked away, gritting her teeth. It took all of her willpower to not punch him in the throat.

“Remember you have a week,” he called. “A week until I make you the next example.”

She continued through the alley that opened to the two main roads intersecting at the center of town. She walked along the wall of the basilica of the One True God, where someone had decorated the outside with graffiti. The bright greens and blues contrasted against the pale earth-colored bricks.

Once she was sure the cleric hadn’t followed her, the adrenaline rushed from her legs and she leaned against the wall for support. Her heart pounded in her chest. She shouldn’t have allowed him to get so close.

“I wish someone would tie him down,” she muttered as she cut across the intersection, and one of the hover cars honked as she passed. She needed to get to the bar. It didn’t matter what the cleric threatened; he would never set foot in her place of business. She was safe there.

The cleric came into town shortly after the most recent elections and constantly flexed his powers, knowing he had the full weight of Dominion support behind him. She never bothered learning his name—that would have required humanizing him, and she wanted to do no such thing. Both religions had lived peacefully in the town of Ballarat for years. Rei didn’t understand why that had to change now. That wasn’t true. She knew it was a question of control. It was what the Dominion did best.

Rei wondered if she should go ahead and convert. The action would be hollow since she knew the gods existed. She knew they would return to save the star cluster—one had already been reborn.

She shook her head. If she gave into that monster’s demands, her influence would turn away more people from the gods. The idea fueled her anger and drove her to want to take action. No one should choose a religion based on what she did, anyway. People should believe what they wished. 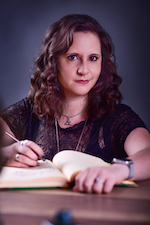 Mari, a native Hoosier, currently lives in southern Germany where she entertains people with her adventures as an American expat in the Land of Beer and Pretzels on her blog adventuresoflamari.com as well as the adventures of her pugs, Abner and Roxy. When she’s not writing, Mari cooks, snowboards, dances to the beat of her own drum, reads late into the night, and binge watches Netflix with her husband. The God Queen is her debut novel.