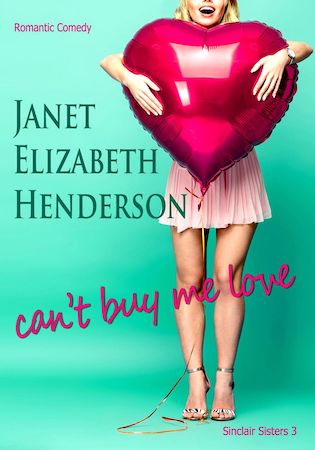 It turned out hell was a small town in the Scottish Highlands. Oh, sure, the locals called it Invertary, but Agnes Sinclair knew better—the town even had an old woman everyone called Satan. If that wasn’t a sign she was in hell, she didn’t know what was. All Agnes had ever wanted was to get out of Scotland, and now she was stuck there with no escape. And all because of one teeny, tiny incident (he totally deserved it!) that got her blacklisted in the hotel industry. Now, her only career option is managing a hotel owned by a guy who looks like Disco Santa, in a town where everyone marched to their own damn beat. And, as if being trapped in hell wasn’t bad enough, a spate of thefts at the hotel makes the owner call in a member of Benson Security to help her get to the bottom of them. Agnes doesn’t need help. She especially doesn’t need it from a sexy single father whose every breath tempts her to reevaluate what she wants out of life. A man who makes her wonder if Invertary is where she truly belongs.

***This is a full length, standalone romance with an HEA***
**It includes characters from the Invertary (Scottish Highlands) series and the Benson Security Series**
*You don’t need to have read any other books in any series to enjoy this one!*

This is the start of the book, where we find out the heroine is in a job she doesn’t want and the hotel she works in has been suffering a spate of thefts since she started. No clues for guessing who’s suspect number one! So, the hotel owner calls in a member of the local security team to look into things. And Logan and Agnes do NOT hit it off!

It turned out the Catholics were right—purgatory was real. And it was a small town in the Scottish Highlands. Oh, sure, the locals called it Invertary, but Agnes Sinclair knew better. She wasn’t fooled by the picturesque loch or the rows of crooked white houses. Invertary was where souls came to have the hope sucked out of them—or whatever it was that happened in purgatory. Not being Catholic, Agnes wasn’t sure what went on there, but with a name like purgatory, it couldn’t be good. All she knew for sure was that she’d only been in town for three weeks, and already she’d lost the will to live.

“You called a security firm to investigate me?” She glared at her new boss, Dougal Jamieson, the owner of Invertary’s only hotel, and he didn’t even squirm.

He tugged down his red tartan waistcoat, which he’d teamed with a pink button-down shirt, and glared back. “I called them in to investigate the thefts. The ones you informed me were happening. Was I supposed to ignore them?”

“You were supposed to let me do my job and investigate them myself. That’s why you employed a hotel manager. To free you up to take care of the pub and build your new conference center.” The conference center that was still in the planning stage because the land Dougal needed to build it was being held hostage by an old woman the town called Satan. Which seemed appropriate, because if this was truly purgatory, Satan should live in it. Right? She really needed to find a Catholic and have them explain this stuff to her.

“You might be the day-to-day manager, but this is still my business,” Dougal snapped.

It was clear to Agnes, after only three weeks in the job, that Dougal didn’t actually want to let go of the responsibility of managing his hotel. So he’d taken to managing her instead.

His micromanagement was beginning to make her skin crawl, and the urge to gag him and lock him in a closet grew stronger by the minute.

Dougal’s white brows furrowed as he huffed a breath that made his matching mustache and beard flutter. Her boss was Santa dressed as Elton John, with a booming voice and a deep Highland burr. Talking to him was like having a bad acid trip.

It was on the tip of her tongue to demand to know why he’d hired her when he seemed so set on doing the job himself. But Agnes already knew the answer—her sister’s husband had talked him into it. Yep, that’s how pathetic she’d become. Even though she’d spent ten years studying part time to get a degree in hotel management and had countless hours of practical experience under her belt, she needed her sister to find her a job.

There were days, like this one, when she second-guessed the decision that’d landed her in her current predicament. She’d been offered a job managing a large hotel that was part of a famous chain, and all she’d had to do to secure the position was have sex with the owner. Agnes had politely declined, kicking his nuts into next week as she did so. Less than twenty-four hours later, she’d been blacklisted throughout the entire UK hotel network. Which had led her to this moment—a face-off with disco Santa.

She should have had sex with the creepy hotel owner.

Taking a fortifying breath, she reached deep for what little patience ran in her genes. “I know this is your hotel, and I understand that I work for you. But I just want the opportunity to do my job before you decide you need someone else to do it for me.”

“This isn’t a judgment of your abilities.” Dougal’s voice reverberated off the walls. “It’s an attempt to give you some help. Benson Security can investigate the thefts while you manage the hotel.”

What was left hanging in the air between them was the fact the bulk of the thefts had only started when she’d arrived in Invertary. She looked her boss straight in the eye. “I’m not the one stealing from you.”

He smacked a beefy hand on her desk. “Did I say that?” He turned to the man leaning in the doorway. The man Agnes had been steadily ignoring since he’d arrived with her boss ten minutes earlier. “Did I, at any point, suggest my manager was stealing from me?”

Agnes tossed her long, straight blonde hair over her shoulder, folded her arms over her gray suit jacket, and tapped her toe. Yes, what exactly did the almighty ‘security specialist’ think of this situation?

The corner of the man’s mouth quirked as he uncrossed his arms and ankles and stepped into the room. At about five foot eight or nine, he wasn’t massively tall, but he would still tower over her. He wore a black long-sleeved tee with the sleeves pushed up, a pair of dark blue jeans, and brown suede boots. His thick, mahogany hair, shorter at the sides, was pulled back in a rough right parting. He reminded her of a younger Tom Cruise. Only with a nose that’d been broken at some point and set crooked. They shared the same lean, muscled physique, and the same amused sparkle in their eyes.

“What I think,” he said, “is that we all need to take a step back and calm down.”

And that was all she needed to hear to know he was an ex-cop—it was in his tone. The same tone she’d heard many times over the years. Perfect. This was just what she needed.

Janet is a Scot who moved to New Zealand fifteen years ago. Among other things, she’s been an artist, a teacher, a security guard at a castle, a magazine editor, and a cleaner in a drop in center for drug addicts (NOT the best job!). She now writes full-time and is working on her 19th book. Her books have won several awards, including the Daphne du Maurier award for excellence in mystery and suspense. When she isn’t living in her head, she raises two kids, one husband, and several random animals. She survives on chocolate and caffeine.