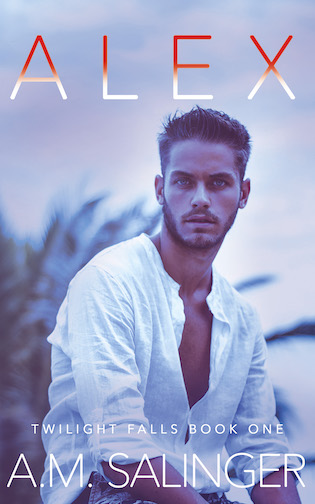 Alex Hancock needs money to salvage his career. Finn West needs a spouse to stop his aunt from sabotaging his future. Can the two men make more of the fake marriage they enter into?

When Alex’s business partner runs off to Mexico with their company funds, the lawyer has little choice but to return to his hometown of Twilight Falls to marry someone he’d never met in order to raise the money to save his business. What he didn’t expect was that the woman he was meant to wed would turn out to be a gorgeous, brooding man.

Finn had resigned himself to a life without love after his wife’s death from cancer. Wracked with guilt at never being able to satisfy her in bed, Finn is shocked when his body and his heart starts responding to the man he is tricked into marrying to stop his aunt from dissolving his trust fund.

Passions collide when the two men start exploring their relationship in ways neither of them anticipated. Can Alex convince Finn to embrace his sexuality and take a chance on them? Or will Finn run away from his only chance at true love?

Discover Alex and Finn’s story in the enthralling first novel in Twilight Falls, the new series by the author of the bestselling, contemporary romance series Nights.

Alex Hancock came out of the coffee shop opposite the courthouse and froze in his tracks.

Someone had parked their dirty, mud-streaked Jeep Wrangler close to his pristine, black and red Triumph motorcycle.

Alex’s knuckles whitened on his cup of black coffee.

When it rains, it fucking pours!

He stormed across the street, stopped in front of the offending vehicle, and glared at it as if it had committed a crime. A car slowly pulled up behind him.

“Wow,” someone murmured. “You look pissed.”

Alex turned. A pretty brunette was watching him with an amused expression from behind the wheel of a red, convertible Mini.

“You would be too if some asshole just blocked you in!” he snapped.

Izzy Batista’s green eyes sparkled impishly as she observed the grimy, four-wheel drive. “Yup, that guy must be one giant dick.”

She parked her car and joined him outside the courthouse.

“I gotta give it to you, Hancock. You sure scrub up nice.” Izzy placed her hands on her hips and scrutinized him with a critical eye.

Alex sighed irritably and downed his drink. He winced when a burst of acid rose in his throat.

“Easy on the coffee, stud,” Izzy murmured. “We don’t want you getting an ulcer on your big day.”

“I can’t believe I’m doing this,” he mumbled to himself. “Me, Alex Hancock, getting married.”

Izzy patted his arm. “No backsies.” A trace of steel underscored her friendly tone. “Remember, you got a lot riding on this.”

He crushed the coffee cup and tossed it in a nearby trash can.

It had been a month since the life Alex had carefully built in San Diego had come crashing down around him, after his business partner of two years embezzled from their law firm and ran off to Mexico. Mired in debt and with his new condo on the verge of being repossessed, Alex had desperately been trying to raise the necessary capital to salvage his career and company when Izzy Batista had called him out of the blue ten days ago. The sister of Wyatt Batista, one of Alex’s lifelong friends from his hometown of Twilight Falls, Izzy had discovered the predicament he was in through her older brother.

“I may have a solution to your problems,” Izzy said. “Word of warning though, it’s pretty unorthodox.”

Alex stilled where he sat on his couch, his cell phone in hand. “What do you mean?”

“One of my clients is in trouble,” Izzy said. “They have to get married by the end of the month or they’ll lose their estate and half of their considerable fortune.”

Izzy sighed. “I’m saying this client needs a mail-order groom. And pronto. They’re willing to pay half a million dollars to the right candidate.”

Alex’s mouth went dry. “Half a million dollars?” His heart pounded against his ribs as he glanced at the boxes filling the apartment. He’d barely started unpacking when Ryan had pulled the rug out from under him and disappeared with half the company’s funds.

“Yup, half a million dollars,” Izzy repeated. “The contract’s for six months. Marry the client, live with them, and then walk into the sunset with the money and no strings attached.”

Alex swallowed, shocked that he was even entertaining the crazy idea Izzy had just proposed.

“Where does your client live?” he mumbled.

Alex grimaced at Izzy’s answer. He raked a hand through his hair and stared at the dazzling lights of San Diego Bay through the glass doors overlooking his terrace, a storm of memories and bittersweet emotions crashing over him.

“I know you don’t like coming back here, Alex,” Izzy said quietly. “Not since the accident. But this could solve all your problems. And my client’s too.”

Alex chewed the inside of his cheek. “What’s wrong with your client?”

“What makes you think there’s anything wrong with my client?” Izzy said in a voice that Alex immediately distrusted.

“Because someone with that much money shouldn’t be struggling to find herself a fiancé, even a fake one. So what is it? Is she unattractive? Does she have a horrible personality?” He pulled a face. “Does she eat puppies for breakfast?”

“None of the above,” Izzy replied in a cheerful tone. “The client is gorgeous. They’re just a bit…eccentric, is all.”

Alex mulled Izzy’s words over. Eccentric he could deal with.

“Are they expecting sex?”

A soft chuckle travelled down the line.

“No, it isn’t that kind of arrangement. Besides, I know you’re more into dicks than vaginas.”

“And here I thought you moved to San Diego for all the gay guys,” Izzy said drily. “You know, since you’d pretty much fucked all the hot ones here in Twilight Falls.”

Alex scowled. “I only fucked one hot guy in that town.”

Izzy laughed. Alex found his lips curving in a faint smile at her bubbly voice. Truth be told, he missed Izzy and Wyatt. He missed all the friends he’d left behind when he decided to move to San Diego, after the accident that had changed all of their lives.

A comfortable silence settled between them.

“So, what will it be, Alex?” Izzy finally said.

Alex hesitated. “The end of the month is only ten days away.”

“Your math is spot on. I knew there was a reason why you became a lawyer.”

Alex ignored her sarcastic words. “Give me a few days to think about it.”

It had taken him three days to make his decision. Six days later, he’d put his stuff in storage, returned his apartment keys to his realtor, and climbed on the beautifully restored, classic motorcycle he’d owned since he was seventeen for the one-hundred-and-fifty-mile ride to the San Bernardino Mountains and the quaint, historic town of Twilight Falls.

Nestled in a valley of towering pine forests and home to the picturesque waterfall and rapids from which it took its name, Twilight Falls started life as a nineteenth-century trading post and mining settlement, during the California Gold Rush. After a slump following the two World Wars, the place saw a strong revival in the second half of the twentieth century, as a result of a sustained campaign by the city council to turn it into a tourist town. The rise in outdoor sports activities meant it now stayed busy pretty much all year around, with the briefest of lulls at Thanksgiving and the New Year.

Alex had reached Twilight Falls late last night. Having refused Izzy and Wyatt’s offer to put him up at their place, he’d booked himself into a motel outside town; the spring tourist season was just getting started and there’d still been rooms available at short notice. Not that he would have wanted to stay in town. Even though it had been twelve years since he’d left the place, he was bound to bump into someone he knew and he wasn’t in the mood for small talk.

“Are you ready?” Izzie said presently, excitement raising the pitch of her voice.

Izzy grinned. “Yeah, well, if you’d stayed at our place, we could have gotten you wasted and you’d be doing this drunk right now.”

“I really don’t think the county clerk would be impressed if the groom turned up with a hangover,” Alex said sternly. “Besides, I’m entering a legal agreement with this woman. The least I can do is show up sober.”

He looked up at the two-story, cream stucco and red-brick building before them and squared his shoulders.

Whoever this broad is, I only have to live with her for six months. How bad can it be?

“Nothing.” Izzy flashed him a bright smile, hooked her arm through his elbow, and guided him up the short flight of steps and into the building.

They checked in at reception and headed in the direction of the court rooms. Surprise darted through Alex when Izzy walked past the austere wooden doors and continued down the hall.

“Where are we going?” he said, puzzled.

“To the chapel,” Izzy replied breezily.

He arched an eyebrow.

“The client insisted,” she explained with a mysterious smile.

The first tendrils of unease started coiling through Alex. Izzy was acting strange. And he wasn’t sure he liked the hint of devilment in the depths of her eyes.

The chapel doors appeared up ahead. Alex’s pulse speeded up when they opened them and stepped inside a large, airy chamber. The chapel was a relatively new addition to the courthouse and had been designed along the traditional lines of a church, with an altar, a chancel, and a nave split by a central aisle. But it wasn’t the charming ecclesiastical interior or the delightful pastel colors around them that caused Alex to draw a sharp breath and rock to a stop on the checkered marble flooring.

He stared beyond the bright posies and white lace decorating the wooden pews to the two figures rising to their feet from the front right row.

“Jesus, Izzy!” Alex hissed, shock reverberating through him. “I can’t marry her! She’s older than my grandmother!”

The elderly dame in the pink brocade dress and pale floral hat arched an eyebrow.

“You were right,” she told Izzy. “That one has a smart mouth on him.” The woman’s eyes fairly twinkled with glee as she studied Alex’s stunned expression. “I’m not the one you’re marrying, sonny.”

Alex’s heart stuttered. His gaze switched to the tall, dark-haired man in the smart, navy-blue suit and the ivory, rose boutonnière next to the woman. A thunderous expression clouded the stranger’s handsome, stubbled features.

“What the hell is going on, Izzy?” the man growled. 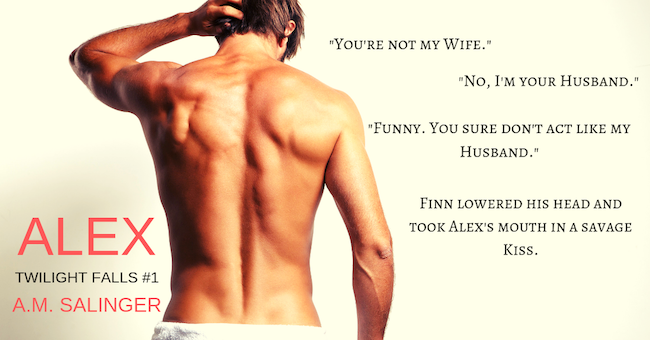 Ava Marie Salinger is the pen name of an Amazon bestselling author who has always wanted to write scorching hot contemporary romance. In 2018, she finally decided to venture to the steamy side. NIGHTS is the first of several sizzling series featuring sweet, sexy men with dark pasts and a whole lot of love to give to the ones brave enough to fight for their hearts. When she’s not dreaming up hotties to write about, you’ll find Ava creating kickass music playlists to write to, spying on the wildlife in her garden, drooling over gadgets, and eating Chinese.
Want to be the first to know about Ava’s new releases and get access to exclusive content, sneak previews, sales, and giveaways? Then sign up to her Reader Group here and join her VIP Facebook Fan Group here.