Fans of Susan Dennard’s Witchlands series have fallen in love with the Bloodwitch Aeduan. And now, finally, comes his story.

High in a snowy mountain range, a monastery that holds more than just faith clings to the side of a cliff. Below, thwarted by a lake, a bloodthirsty horde of raiders await the coming of winter and the frozen path to destroy the sanctuary and its secrets.

The Bloodwitch Aeduan has teamed up with the Threadwitch Iseult and the magical girl Owl to stop the destruction. But to do so, he must confront his own father, and his past.

War has come to the Witchlands . . . and nothing will be the same again.

Iseult has found her heartsister Safi at last, but their reunion is brief. For Iseult to stay alive, she must flee Cartorra while Safi remains. And though Iseult has plans to save her friend, they will require her to summon magic more dangerous than anything she has ever faced before.

Meanwhile, the Bloodwitch Aeduan is beset by forces he cannot understand. And Vivia—rightful queen of Nubrevna—finds herself without a crown or home.

As villains from legend reawaken across the Witchlands, only the mythical Cahr Awen can stop the gathering war. Iseult could embrace this power and heal the land, but first she must choose on which side of the shadows her destiny will lie.

Blade of Secrets by Tricia Levenseller 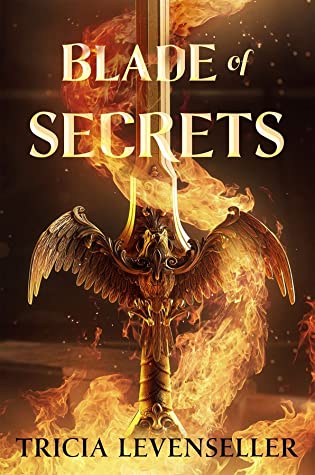 Eighteen-year-old Ziva prefers metal to people. She spends her days tucked away in her forge, safe from society and the anxiety it causes her, using her magical gift to craft unique weapons imbued with power.

Then Ziva receives a commission from a powerful warlord, and the result is a sword capable of stealing its victims’ secrets. A sword that can cut far deeper than the length of its blade. A sword with the strength to topple kingdoms. When Ziva learns of the warlord’s intentions to use the weapon to enslave all the world under her rule, she takes her sister and flees.

Joined by a distractingly handsome mercenary and a young scholar with extensive knowledge of the world’s known magics, Ziva and her sister set out on a quest to keep the sword safe until they can find a worthy wielder or a way to destroy it entirely.

A teenage blacksmith with social anxiety accepts a commission from the wrong person and is forced to go on the run to protect the world from the most powerful magical sword she’s ever made.